Which Industries Spend the Most on US Digital Advertising? 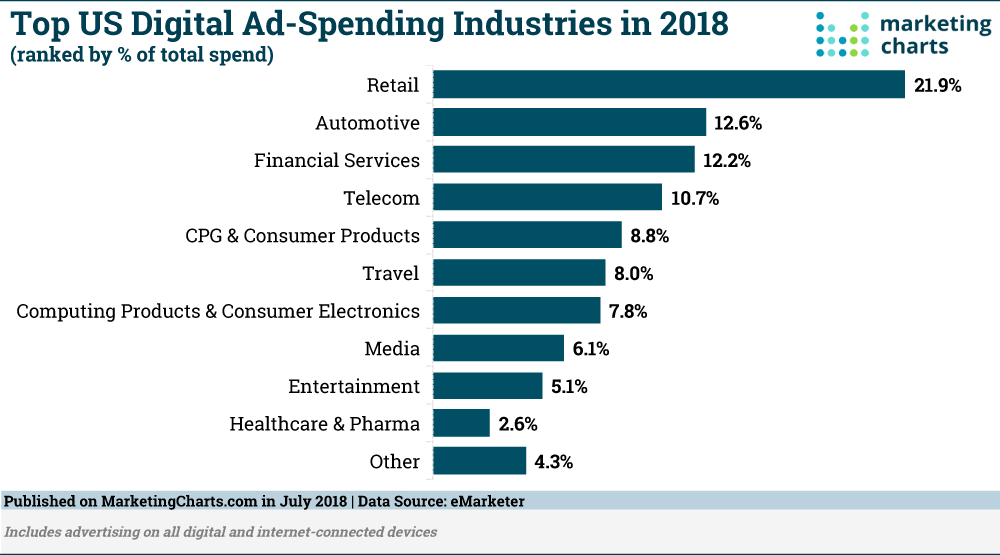 Digital advertising in the US continues to grow quickly, with one estimate suggesting it’s now a $30 billion larger market than TV advertising. Which industries are contributing most to digital advertising’s rapid ascent? Recent figures from eMarketer break out spending by industry, indicating that Retail spends by far the most on digital ads.

The estimates indicate that total digital ad spending in the US this year will reach $107.3 billion, a figure that’s a little more bullish than recent PwC estimates.

Putting aside the exact size of the market, though, it’s instructive to see how spending is distributed across industries.

Retail constitutes by far the largest piece of the pie, with the industry expected to spend $23.5 billion on digital ads this year. That would represent an impressive 21.9% of total digital ad spend. By comparison, earlier figures from Kantar Media have pegged Retail as the leading industry by total ad spend, but at a much smaller 13% of total ad spend. (Those figures were for Q1 2017.) That suggests that Retail is a much bigger player in digital than offline advertising.

The eMarketer release notes that the Retail industry will spend more than $16.3 billion on mobile advertising this year, which would represent some 69.5% of its total investment in digital advertising. However, that wouldn’t make Retail more heavily weighted to mobile than the digital ad market as a whole, as the Retail industry would occupy close to 22% share of total mobile ad spending (on par with its 21.9% share of total digital ad spend).

Meanwhile, just behind Automotive in the standings is the Financial Services sector ($13.05 billion this year), followed by Telecom ($11.43 billion) and CPG & Consumer Products ($9.4 billion).

Which Industry’s Spend is Rising Fastest?

Overall, eMarketer expects digital ad spend in the US to grow by a compound annual rate of 14.9% from 2016 through 2019. Some industries will be upping their spend by more than others over that time frame, though.

Among the top 10 industries by spend, the Entertainment sector will have the largest compound annual growth rate, of 17.7%, per the report. It’s followed by the Media (+16.8%) and Computing Products & Consumer Electronics (+16.6%) sectors, each of which will see considerably faster growth than the average.

By contrast, Healthcare & Pharma, the 10th-largest by spend this year, will see the slowest increase over that time period, with expected annual growth of 11.7%. The Travel (+13.2%) and Telecom (+13.5%) industries will also see slower-than-average compound annual growth.

The full stats can be viewed here.