America’s Most Loved Brand Is… 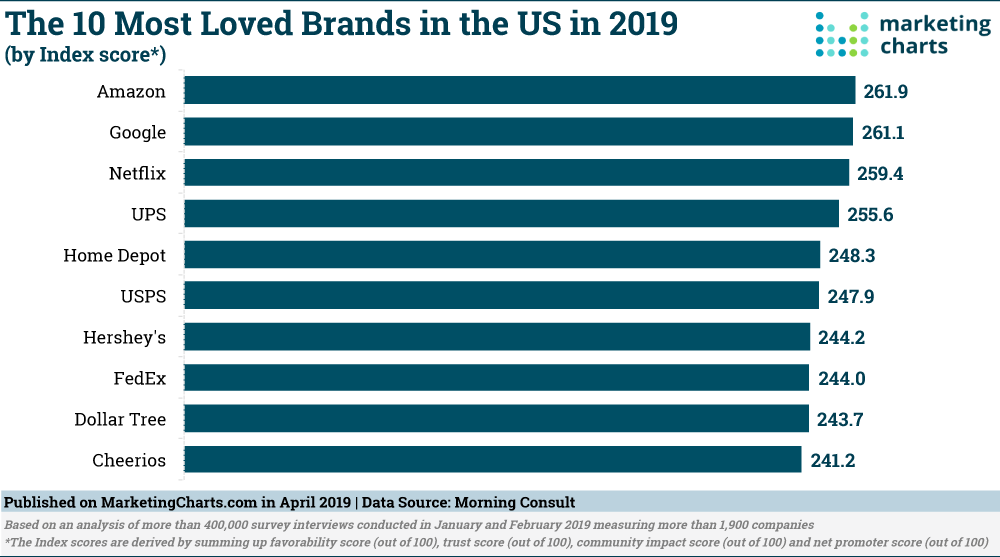 What elements go into making a brand that Americans love? For Morning Consult’s analysis, it’s a mixture of favorability, trust, community impact and the likelihood that the consumer would promote the brand (Net Promoter Score). This year, Amazon ranked high in all these criteria to top the list of Most Loved Brands in America.

A quick note on how Morning Consult came up with their methodology. The index score is achieved by adding together the following scores, leading to a maximum possible score of 400:

Even though concerns over privacy have grown, tech giants Amazon and Google are the second and fourth most trusted brands in the ranking, with 68% and 67% respectively saying they trust them to do the right thing.

One noteworthy trend is the fact that both Netflix and YouTube feature in the top 4 brands for consumers ages 18-37. While good news for online video, it also reflects a declining trend in traditional TV viewing among younger groups.

Morning Consult also notes that Gen Z is the generation that looks the most different from the population as a whole, as 13 brands out of their top 25 do not appear in the overall ranking. They are also much less likely to rank companies highly, with their average score (68.5) being 27 points below the adult average (95.7).

The next generational group had the same top 4 brands, albeit in a slightly different order (Netflix at #1, followed by Google, Amazon and YouTube). Entertainment features heavily in this group, with those joining Netflix in the top 20 including Nintendo (#6), PlayStation (#16), Disney (#17) and Pixar (#19).

The ‘MTV Generation’ doesn’t have YouTube (#17) in its top 4 brands, although the other tech players (Google #1, Amazon, Netflix) still feature. Instead, UPS (#4) takes YouTube’s spot. The other entertainment brands don’t feature at all, with the more functional Tide (#11) and The Weather Channel (#14) featuring in the rankings.

The generation with the most wealth seems comfortable in the home – either in terms of improvements, or in having goods shipped there. The top 4 spots go to UPS, Home Depot, USPS and Lowe’s. Continuing this trend, FedEx comes in at #5, with other domestic brands including Tide (#9), Crest (#11), Ace Hardware (#12), Campbell’s Soup (#14), Reynolds Wrap (#15), Betty Crocker (#16) and Clorox (#18). Neither Google or YouTube features in the top 20, but Amazon does come in at #6.

About the Data: Rankings were determined using online surveys from January through February 2019. Between 1,000 and 56,000 adults rated each of the 1,900 companies studied, with the average (median) company being surveyed more than 11,000 times.