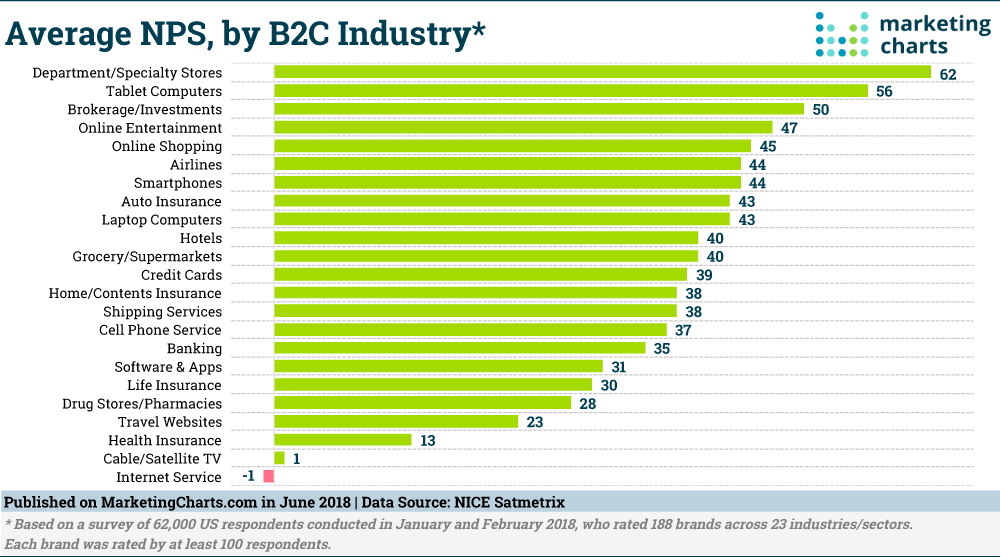 Which B2C industries and brands enjoy the highest net promoter scores (NPS)? NICE Satmetrix, one of the co-developers of this metric, asked 62,000 US respondents to rate 188 brands across 23 industry sectors, detailing the highlights in its 2018 B2C NPS® Benchmarks at a Glance report [download page].

The NPS score is derived by first asking consumers the following question: “On a scale of 0-10, how likely would you be to recommend [brand] to a friend or colleague?” Respondents rating their recommendation likelihood in the 0-6 range (“Detractors”) are subtracted from those rating it a 9 or 10 (“Promoters”), resulting in the Net Promoter Score.

Topping the list of 23 industries by average NPS is the Department/Specialty Store sector, with an average NPS of 62. Last year, Department & Discount Stores rebounded to post their highest ever customer satisfaction rating, per the American Customer Satisfaction Index (ACSI).

Following Department/Specialty Stores in the NPS sweepstakes are Tablet Computers, with an average NPS of 56, and Brokerage/Investments brands, with a score of 50. Recent research confirms that Investment Firms are among the most trusted in the US, which likely contributes to customers’ willingness to recommend them.

There are a couple of somewhat surprising results. Airlines (NPS of 44) aren’t always seen as a beacon of customer appreciation, but they scored in the top tier of industries, perhaps due to a recent boost in customer satisfaction ratings. Meanwhile, Grocery stores and Supermarkets – despite leading in customer trust and experience ratings – were only in the middle of the pack in terms of NPS.

One unsurprising result? Internet Service Providers (ISPs) were at the bottom of the list, the only sector with a negative NPS (-1). That means that more customers on the whole are Detractors than Promoters in this industry. This is somewhat expected, as ISPs and pay-TV providers typically sit at the bottom of the trust and customer experience ratings highlighted above, with Health Insurers also typically lagging on those metrics. As is stands, Cable/Satellite TV emerges as the second-worst of the 23 industries by NPS (+1), with Health Insurance (+13) third-worst.

Which Brands Are NPS Leaders?

That distinction belongs to two brands tied at the top: USAA (for banking); and Costco (for Department & Specialty Stores). The two brands led the way, each with a score of 79, narrowly ahead of USAA’s score of 78 for its Home & Contents Insurance offering.

USAA also leads all brands in customer trust and has previously been identified as the brand that customers would be most likely to recommend.

As for Costco, it has appeared among the top 10 companies in terms of emotional appeal, according to research on company reputations.

Other NPS leaders include:

More details can be found by downloading the summary report here.