To What Extent Are Large Companies Outsourcing Marketing Services? 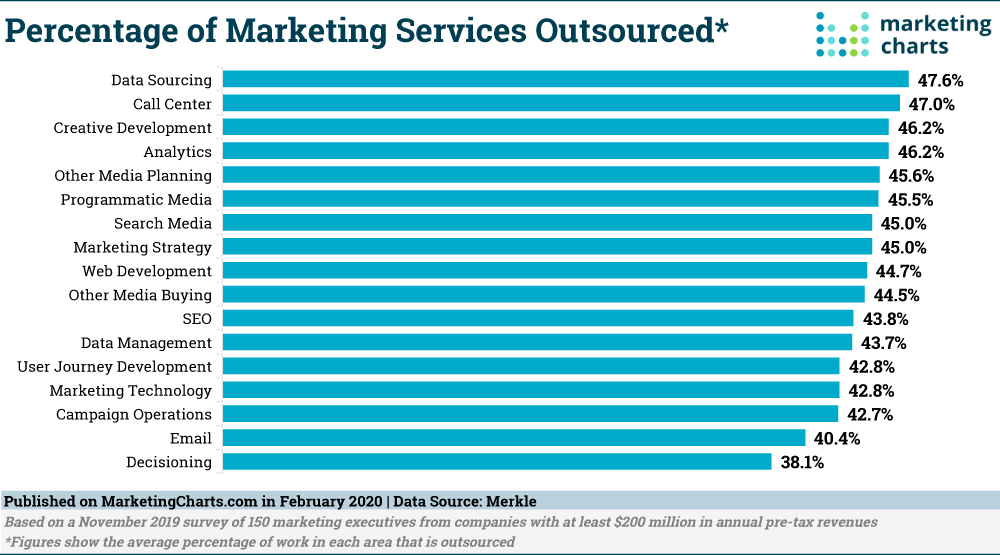 There have been numerous discussions around outsourcing – and insourcing – including the agency vs. consultancy debate. But how much do larger companies outsource? Of course it depends on which work area, but a recent study [download page] from Merkle suggests that data sourcing is at the top of the list, with survey respondents estimating outsourcing almost half (48%) of work in this area.

The debate around which areas marketers should bring in-house or outsource to partners is a continuous one. On the client-side, the desire to achieve cost-efficiencies is a driving factor, while agencies have argued that their capabilities in areas such as customer insights and analytics will garner increased demand for their services.

This latest research by Merkle, based on responses from 150 marketers at companies with revenues of $200 million and up, illustrates that the balance between in-housing and outsourcing differs significantly between capabilities.

Which areas are the most heavily outsourced?

As mentioned above, close to half of data sourcing work is estimated to be outsourced, the highest proportion of all the services analyzed.

Following closely behind are call center services, at 47%. Given that consumers aren’t yet entirely convinced by entirely automated customer service options and their preference for speaking to humans rather than chatbots, this may persist for some time.

Again on the data theme, analytics is an area heavy in outsourcing, as some 46% of work in this area is estimated to be outsourced.

Separately, although the ANA reports that the majority of its members have an in-house agency, there are still many large firms outsourcing elements of their advertising operations. Large swatches of creative development (46%), programmatic media (46%) and other media buying services (45%) services are outsourced, per the marketing executives surveyed. But the future trends for these can vary.

Where has there been a shift to more outsourcing in the past 12 months?

Even though some of the key services offered by advertising agencies are being frequently outsourced, the changes between them in the past year are somewhat different. For example, while 39% of large companies say they have made a shift to outsourcing their programmatic media, only around one-quarter (27%) have done the same with creative development.

Other areas where larger companies are shifting to outsourcing include web development (40%), SEO (39%), and marketing technology (38%). This makes sense given that hiring skilled professionals is a key challenge for more than half of firms and that marketing technology now accounts for up to 30% of North American marketers’ budgets.

Where do companies plan to outsource more in the next 24 months?

Looking forward, it appears that there is desire to make some changes to outsourcing practices. Despite an already high degree of outsourcing right now, 31% plan to shift their programmatic media to external partners in the coming two years, as programmatic continues to see strong spending growth overall.

For other technical and data areas, it appears that more companies will continue to seek outsourced assistance, with around 4 in 10 planning to use external partners in services such as web development (41%), data management (40%) and analytics (40%).

About the Data: Figures are based on a survey of 150 executives at companies with a 2018 pre-tax revenue of at least $200 million.