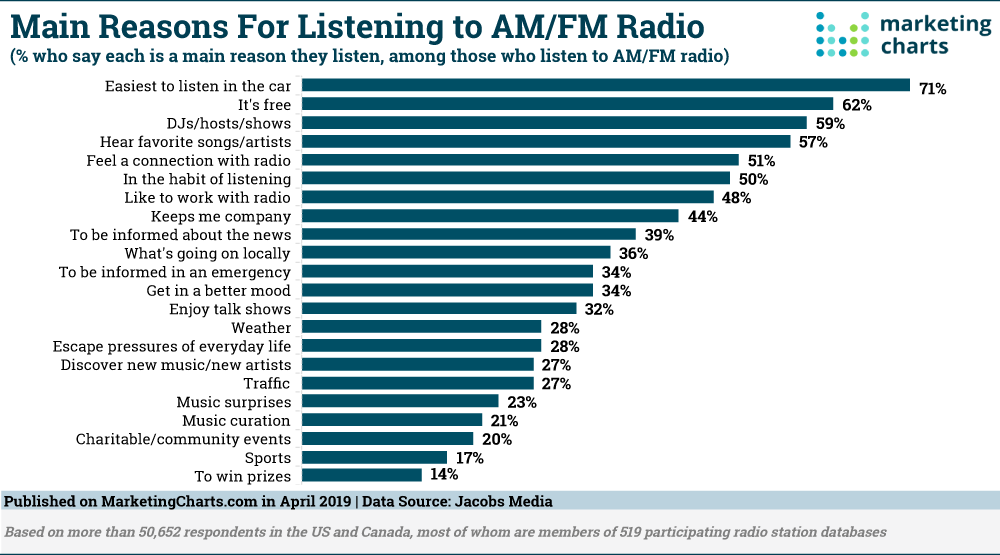 Despite the growing list of listening options available, AM/FM radio remains popular with its listeners. In fact, among the more than 50,000 AM/FM listeners surveyed in the US and Canada for the latest annual TechSurvey report [download page] by Jacobs Media, 16% said they are actually listening to AM/FM radio more.

Given the plethora of listening options now available – from podcasts to music streaming – what is keeping listeners hooked to AM/FM radio? The most common reason comes down to America’s love of the automobile, as the most frequently cited reason (71%) is that it’s easiest to listen in the car. This is not surprising, given that almost all cars, new and old, will have a traditional radio in place. The next most common option is that it’s free (62%).

That being said, content has a role to play. Around 6 in 10 listen because of the DJs/hosts/shows (59%) with a similar percentage saying they can hear their favorite songs/artists (57%). Emotional factors are at play too, as 51% say they feel a connection with radio and 44% say that it keeps them company.

Another factor that contributes to the continued popularity of AM/FM radio is that it has a more local feel than the other listening options available. The majority (86%) of respondents reported that they either agreed (40%) or strongly agreed (46%) that radio’s local orientation was one of its primary advantages. This sentiment has been rising steadily throughout the years, with 77% of respondents saying they agree/strongly agree in 2016, growing to this year’s 86%.

Respondents continue to spend more time listening to their home station using traditional AM/FM radio than they spend on digital methods (computer, mobile, smart speaker, podcasts). However, the percentage of time on traditional radio has been shrinking while digital continues to grow. This year respondents spend 65% of their typical weekly AM/FM time listening via traditional platforms (AM/FM radio at home/school/work or in a vehicle), down from 70% last year, and 85% in 2013. Digital’s share of listening (on computer, mobile, smart speaker, podcasts), has grown to 31%, up from 27% last year and 14% in 2013.

Some Gen Z Listening More Due to Smart Speakers

As with last year, Smart Speaker ownership has had an effect on AM/FM listening habits, in particular with Gen Z listeners. Nearly one-fifth (19%) of Gen Z respondents reported that they listened to AM/FM radio either a little more (10%) or a lot more (9%) since getting a Smart Speaker. (Note: these results are based on a sample of AM/FM radio listeners, so may not apply to all Smart Speaker owners.)

While Smart Speakers have helped to increase the number of Gen Z listening to traditional radio, they are still listening to the radio more in a vehicle than any other platform, with more than two-thirds (69%) saying all or most of their AM/FM radio listening is done in a vehicle.

About the Data: Data was gathered from an online survey of 50,652 respondents from 519 radio stations in the US and Canada.