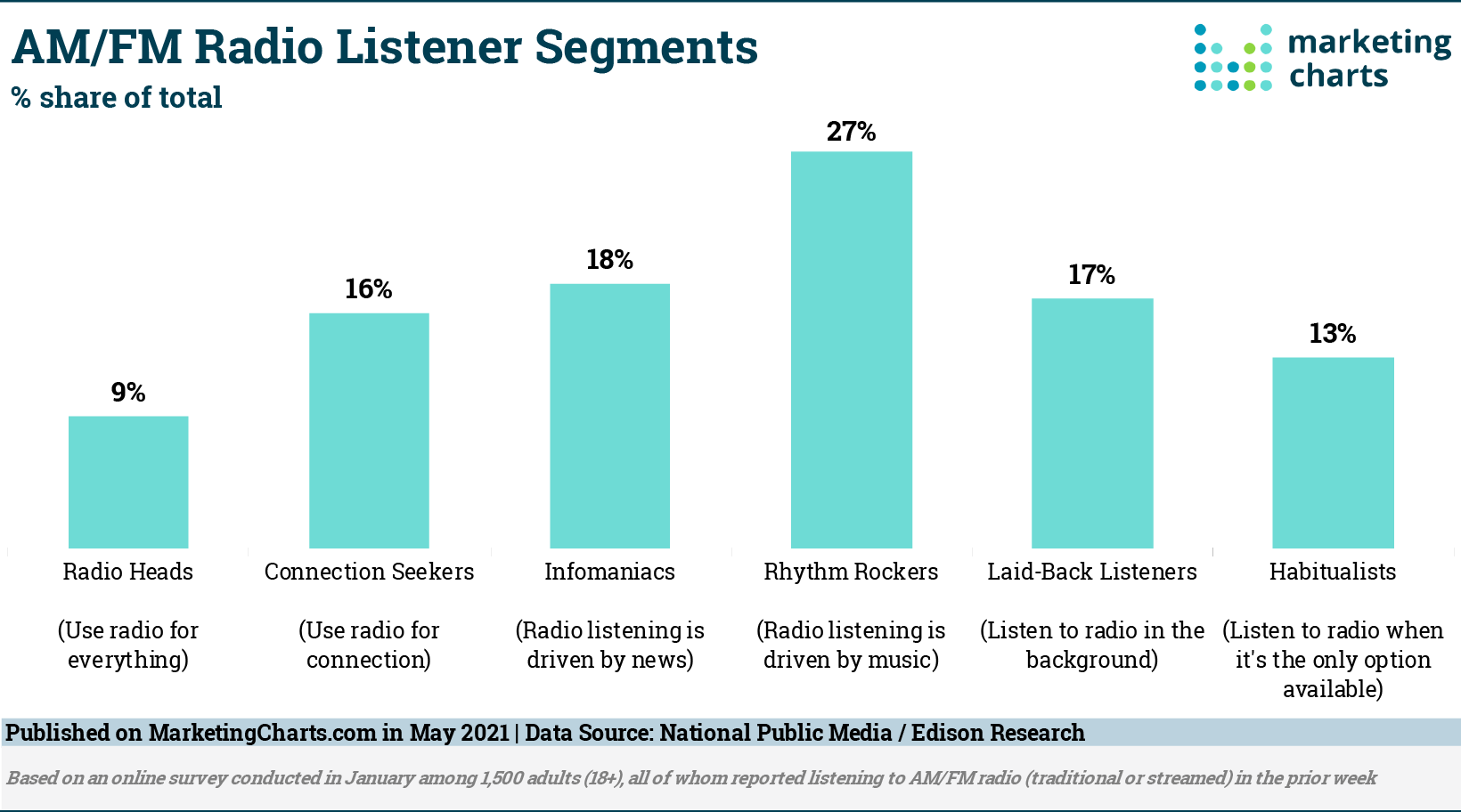 Even with a growing variety of media that adults have available to entertain themselves, a large majority still listen to radio on a weekly basis. In fact, a report [download page] from National Public Media and Edison Research has found that 41% of the time US adults spend listening to audio is done via AM/FM radio.

Not all listeners are created equal, however. Here’s what the survey of 1,500 adults (ages 18+) who listened to AM/FM radio in the week prior to the survey revealed about the different segment of listeners.

While this segment of listeners only make up 9% of total AM/FM radio listeners, they are the most fervent. These listeners spend 29% more time than average listening to AM/FM radio.

Per the report, Radio Heads are more likely to be female, under the age of 54 and feature an over-indexing of Black American listeners. They also have a higher than average income and a higher level of education than the average AM/FM radio listener.

This segment also uses an array of devices to listen. Within the week of the survey, Radio Heads listened to AM/FM radio on their smartphone (43%), Smart Speaker (30%) and computer (29%), as well as tuning in on a radio.

From an advertising perspective, this is the group most likely to be receptive to radio advertisements. Some 72% say they typically listen to sponsorships or advertisements while listening to AM/FM radio. Moreover, Nielsen found that heavy radio listeners are more likely than average to be shoppers.

Not far behind Radio Heads in terms of being receptive to radio advertising are the Connection Seekers. Some 7 in 10 typically listen to ads while listening to AM/FM radio.

The segment, which makes up 16% of radio listeners, are also heavy listeners, spending 12% more time with AM/FM radio per week than average. They are more likely to be female and over-index with listeners ages 55 and older, as well as with White adults.

What sets the Infomaniacs apart from the other listener segments is their thirst for news. Making up almost one-fifth (18%) of AM/FM listeners, these individuals are more likely to listen to the radio for news (96%) than for music (78%).

This is the only group that has a higher share of male listeners than female. They are also fairly advertisement friendly. Only about one-third (35%) say they frequently avoid ads.

Rhythm Rockers represent the largest portion of AM/FM radio listeners (27%). Being music-focused, this segment of listeners are more likely than average to listen to streaming audio services such as Spotify, Pandora and YouTube.

Three-quarters of this group is made up of adults ages 18-54. It also over-indexes with Latinx and individuals with lower incomes. Listeners are also more likely to be female (61%) than male (39%). Some 64% say that they typically listen to advertisements while listening to the radio.

Compared to the previous segment, Laid-back listeners are less receptive to radio ads. Some 6 in 10 (59%) typically listen to ads while listening to AM/FM radio.

What sets this group apart from the others is their preference for listening to the radio in a traditional manner. A full 95% listen via a receiver. They also under-index in weekly time spent listening.

Making up 13% of total listeners, Habitualists only listen to AM/FM radio when there is no other option available. Indeed, they tend not to be interested in audio in general. Furthermore, they are the least receptive to radio advertisements — only 58% typically listen to the ads while listening to the radio.

About the Data: Findings are based on an online survey of 1,500 adults (18+), all of whom reported listening to AM/FM radio (traditional or streamed) in the prior week. The survey was fielded in January 2021.