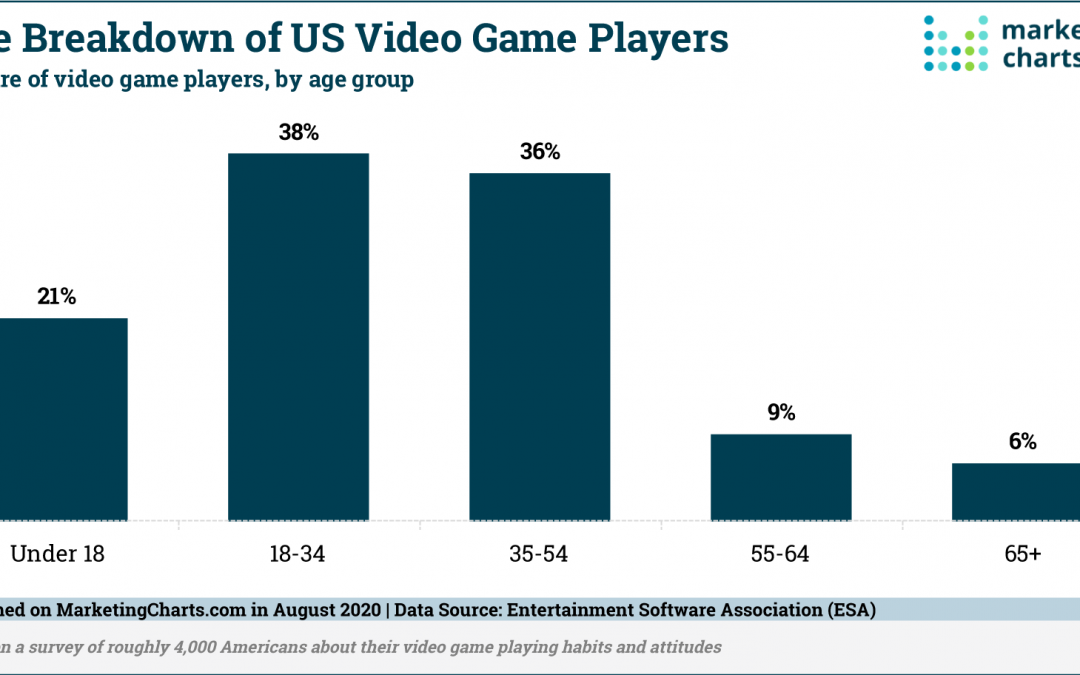 Playing video games continues to be a favorite pastime for Americans, with three-quarters of US households having at least one video game player. And, while 7 in 10 Americans under the age of 18 play video games regularly, a new report [pdf] from the Entertainment Software Association (ESA) shows that video games hold appeal across all age groups.

Where and When Do Gamers Play?

Smartphones appear to be the most common device for adults to play video games, with 6 in 10 (61%) saying this is one of the devices they use for gaming. Also on the list of most common devices for gaming are computers – used by 40% of adult gamers.

A little more than half (52%) of adult gamers indicate they use a game console. Hardware and peripherals for gaming is a thriving business. Almost three-quarters (73%) of gamers say they own a game console. Another 43% own a handheld system, while others report owning a VR device (29%) or a mobile VR device (25%).

The fact that smartphones are one of the most commonly used devices for gaming is not surprising considering that many adults tend to play on-the-go. Although 51% say they play after work or school, others report playing while waiting for appointments (30%), during a break at work or school (26%) or during a commute (15%).

Differences in Age and Gender

Here are a few highlights regarding video game playing among the different age groups and genders:

Additional data from The NPD Group shows that COVID-19 has impacted engagement with video games. More than one-third (35%) of gamers say they are spending more time playing video games than they did a year ago. And, while most report increased engagement on platforms they were already using pre-COVID-19 (94%), 6% say they have specifically begun to use a new device during this time.

The full report of ESA’s findings can be found here.

About the Data: Figures based on a survey of roughly 4,000 Americans about their gaming habits.

Data Hub: Coronavirus and Marketing [Updated] 4 in 10 US Adults Watch Video on A Connected TV Device Every Day Asian-Americans’ Digital Device Adoption Remains Above Average TikTok’s US Adult Users Double Year-Over-Year; Here Are Age and Income Breakdowns Around 1 in 5 Adults Ages 18-44 Subscribe to a vMVPD Service Mobile Adoption Rises Among Americans Ages 50+; Here’s the Latest on Their Top Device Activities