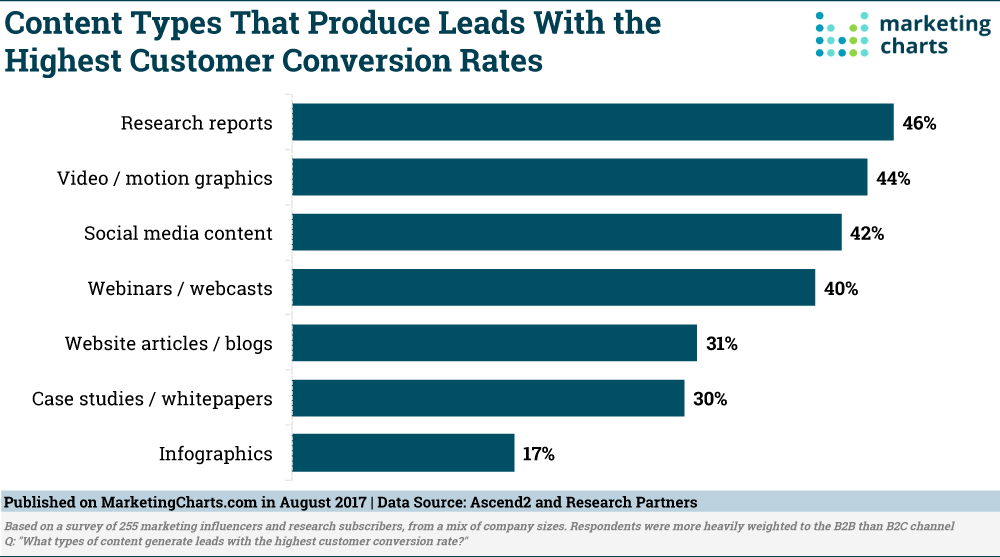 The most important objective of a lead generation strategy is to increase lead-to-customer conversions, according to recently-released survey results [download page] from Ascend2 and its Research Partners. While lead-to-customer conversions also present the biggest challenge to lead generation success, the report identifies some forms and content types that respondents believe are the most likely to help.

The survey was fielded among 255 marketing influencers and research subscribers from a mix of company sizes, with respondents more heavily weighted to the B2B (46%) than B2C (31%) channel.

Asked which types of online forms generate leads with the highest customer conversion rate, and content downloads (57%) came out on top in respondents’ minds. Downloads were followed by webinar registrations (42%) and surveys/polls (33%), with contests and promotions (20%) bringing up the rear.

Interestingly enough, research from Formstack shows the opposite to be true. In an analysis released a couple of years ago, Formstack found that Contest forms had the highest completion rate (34%), followed by Lead Gen (17%), Survey (14%) and Event Registration (11%).

The disparity may owe to the Formstack data being more heavily concentrated on consumer behavior, whereas the Ascend2 survey has more of a B2B skew.

While that may be influenced by the survey sample (which consisted in part of research subscribers), there’s separate research to support that viewpoint.

This is also backed by other research: a recent study from Forbes Insights found that infographics were C-suite execs’ least-preferred format for business insights.

So while charts and data do the trick – particularly interactive visualizations – infographics don’t seem to move the needle. At least with executives…