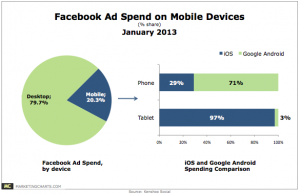 A new study [pdf] from Kenshoo Social reveals that mobile devices (phones and tablets) now account for 20.3% of overall Facebook ad spending. The finding is based on a representative sample of global advertisers using Kenshoo Social to manage their Facebook ad campaigns, covering more than 2 million Facebook ad clicks and conversions delivered in November and December of 2012 across a wide swathe of verticals. Facebook has previously reported that mobile ads accounted for 14% share of its advertising revenue in Q3 2012.

While the Kenshoo study doesn’t break down share of spend by mobile device, it does pit Apple iOS and Google Android against each other in each. With the vast popularity of the iPad, it’s not surprising that for tablets, iOS dominates Android in a head-to-head comparison. Still, the 97% share of tablet ad spending captured by iOS is an extremely high amount. When it comes to mobile phones, though, Android takes the lead, with 71% share of Facebook advertisers’ spend.

The study also found that cost-per-click is 70% higher on mobile devices than on desktops ($1.38 vs. $0.81). That cost discrepancy, though not to the same degree, has been seen in previous research from TBG Digital.