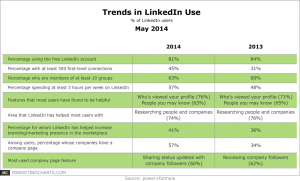 LinkedIn users areÂ spending more time on the platform every week, expanding their first-level connections, and reporting greater use of company pages, according to [pdf]Â results from the latest annual LinkedIn user survey by Wayne Breitbarth and power+formula. What hasn’t changed? The main benefits they’reÂ drawing from the platform, as well as the features they’ve found to be most helpful. RespondentsÂ also continue to ascribe a great deal of importance to their use of the network.

This year, some 36.2% of respondents rated LinkedIn as being “extremely important” (5 on a 5-point scale) to their efforts to grow their networks, develop their businesses, or help them find their employment. That’s up from from 32.8% last year.

LinkedIn continues to help most users to research people and companies (74.1%, down from 75.8%) and reconnect with past business associates/colleagues (72.8%, up from 70.6%). Beyond those areas of general appeal, the platform remains beneficial to a segment of users across a variety of business initiatives, such as:

All of those activities take time, and a majority 56.8% of users report spending at least 3 hours per week on LinkedIn, a significant uptick from 47.8% who reported spending that amount of time last year. Along with that increased time spend, users are also claiming a greater number of first-level connections: this year, 45% say they have at least 500, up from 31% last year with at least that many.

One of the biggest changes from last year appears to be related to the adoption of company pages. In this year’s survey, 57.1% of survey respondents said their companyÂ has a company page; last year, just one-third did. The top company page features in use this year are sharing status updates with company followers (59.8%) and reviewing company followers (57.3%), with those rankings flipped from last year. In a nod to the increasing influence of video, more than one-quarter of those with company pages said they share video of their products and services, up from slightly more than one-fifth doing so last year.

About the Data: The 2014 survey was taken by 896 LinkedIn users from around the world. Respondents were collected via Wayne Breitbarth’s email list, LinkedIn network, Twitter followers, Facebook network, LinkedIn groups, and friends of those groups.