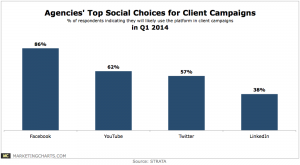 While Facebook is the social media option most agencies report being likely to use for client campaigns, many are also drawn to YouTube, according to new survey results from STRATA. Some 62% of respondents to the Q1 2014 survey reported being likely to use the platform, putting it slightly ahead of Twitter (57%) and trailing only Facebook (86%). In last year’s first-quarter survey, advertisers wereÂ less likely to choose YouTube than TwitterÂ in a comparison of social media platforms.

According to survey results released last month by Outrigger Media, 41% of individuals involved with YouTube media buys are planning to increase their spending on the platform this year. Not surprisingly, YouTube is by far the top online video site for agencies responding to the STRATA survey, and with good reason: new data from comScore suggests that more than 80% of the online video audience watched YouTube videos last month.

In other results from the STRATA study, agencies displayed a level of optimism unmatched in previous surveys. Some 62% said that they see business increasing this quarter in comparison to the year-earlier period, the highest level recorded in the survey’s history. A slight majority – 53% – also project growth to be higher in the first half of this year than the second half of 2013.

Tempering that enthusiasm are concerns regarding web traffic statistics: 56% of agencies surveyed said they don’t trust the web traffic figures and analysis provided by their publishing partners. Moreover, 43% agreed with the IAB’s recent assessment that 36% of web traffic is fraudulent, with another 31% believing that the actual figure is higher.

Solve Media deemed a remarkable 61% of US web activity to be suspicious during Q4 2013, also finding in an earlier survey that 59% of agency media buyers see bot traffic’s harmful effects on campaign performance.