Consumers’ Take on the Future of Advertising 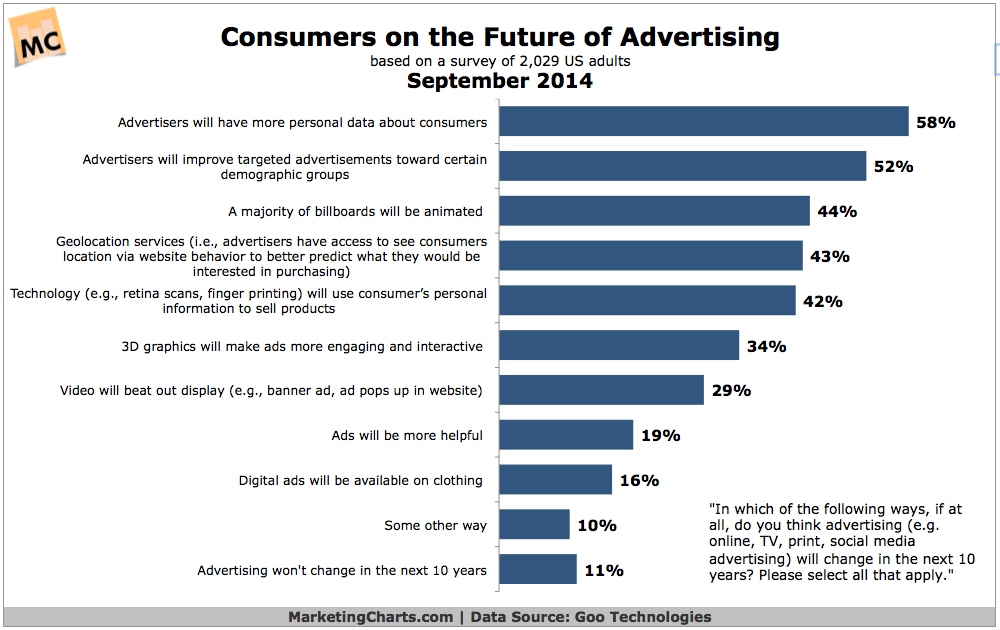 Consumers are well aware of marketers’ increasing data collection practices and focus on audience targeting, according to new survey results from Goo Technologies. Asked in which of various ways they believe advertising will change in the next 10 years, a majority of US adults surveyed indicated that advertisers will have more personal data about consumers (58%) and that advertisers will improve targeted ads towards certain demographic groups (52%). Interestingly, Millennials (18-34) areÂ less likely to believe these changes will occur than their older counterparts.

No other changes achieved a majority consensus, but at least 4 in 10 respondents feel that the following changes are coming:

Of note, there was limited agreement with the idea that video will beat out display (29%), and despite all the forecast changes, only about 1 in 5 believe that ads will be more helpful in 10 years’ time.

Separately, consumers were asked to identify which of a list of advertising types will not survive the next 10 years, with pop-ups (29%) and flash (22%) ads the most likely to be tabbed for extinction. (It’s worth noting that these options had descriptions alongside them, with the description of flash ads as not being supported by mobile phones likely a factor in consumers’ agreement that they’ll go the way of the dinosaurs.) By contrast, few believe native (7%), contextual (7%), personalized mobile (6%) and video (6%) ads won’t survive the next 10 years.

On this front, Millennials were more likely than the average respondents to predict the demise of the flash ad, but slightly less likely to see pop-ups’ eventual disappearance.

See here for the industry’s future according to European marketing students, and here for CMOs’ predictions concerning the fundamental changes for marketing in the next 5 years.

About the Data: The survey was conducted online within the United States by Harris Poll on behalf of Goo Technologies from August 26-28, 2014 among 2,029 adults ages 18 and older. This online survey is not based on a probability sample and therefore no estimate of theoretical sampling error can be calculated.