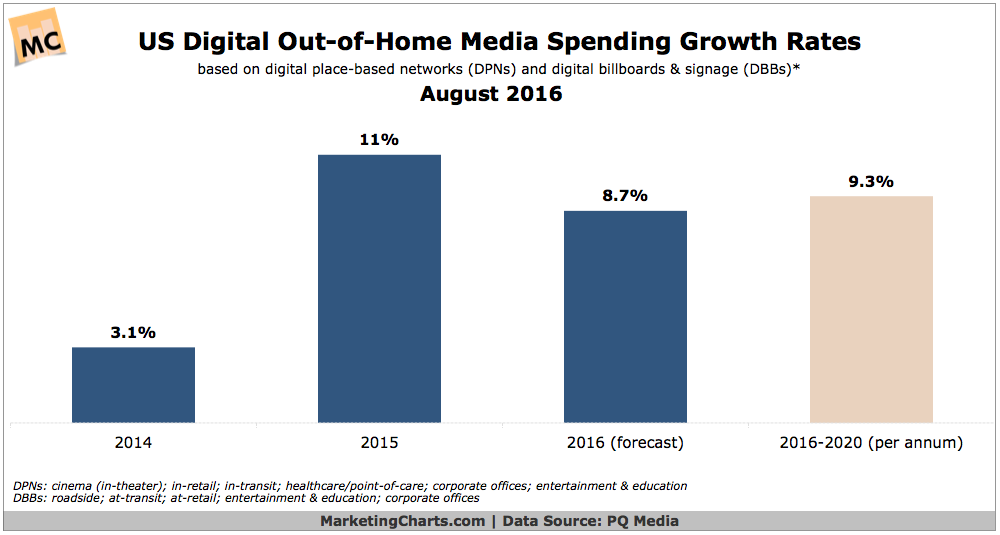 US digital out-of-home media revenues climbed by 11% last year to $2.71 billion, representing the fastest growth rate in 5 years and a rebound from the previous year’s sluggish growth rate of 3.1%, reports PQ Media. Digital out-of-home (DOOH) seems to be making inroads in the battle for consumers’ attention.

PQ Media estimates that consumer exposure to DOOH grew by 4% last year to 54 minutes per week. Consumer exposure is on pace so far to end 2016 with a gain of 5.3%, which would represent the fastest growth rate since 2011. These gains are being driven by the P&O effect (politics and Olympics) as well as an increase in exposure to in-theater advertising.

MarketingCharts’ own consumer research finds that more adults in the US ascribe purchase influence to outdoor ads than to online video ads. Ads in movie theaters don’t have quite the same stated influence, though they’re almost on par with display ads on tablets among Millennials.

[SPONSORED: The Essentials of Advertising – 2016 Kit]

Going forward, PQ Media predicts that DOOH spending will increase by almost 9% this year, and by a compound annual rate of 9.3% during the 2016-2020 period. That’s very similar to an outlook issued by PwC earlier this year, which forecast a 9.4% growth rate for DOOH during the 2015-2020 period. During that timeframe, PwC said it expects DOOH to increase from 38.3% share of total out-of-home advertising to 46.2% share. It’s worth noting that PwC treats cinema advertising as a separate medium, with a slower expected growth rate of 1.6% per annum from 2015 through 2020.