The Typical Millennial Age Range is Fairly Wide. Within It Are Varying Social Media Preferences. 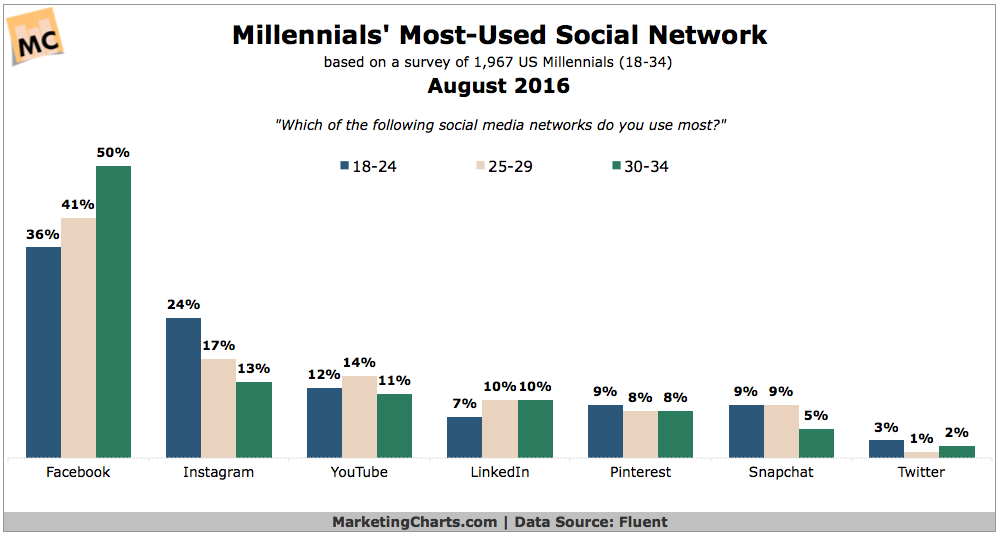 There’s no consensus view of the Millennial age bracket, but most research simply describes them as being 18-34-years old (though that doesn’t seem to change from one year to the next!). But an 18-24-year-old might have a very different lifestyle and outlook than a 30-34-year-olds – and new research from Fluent [download page] suggests that social media preferences differ within the wider Millennial bracket.

Based on a survey of 1,769 Millennials, Fluent found that of 7 social networks identified, 43% reported using Facebook the most often. However, that result masked a significant discrepancy among narrower age brackets: 30-34-year-olds were far more likely to cite Facebook than 18-24-year-olds (50% vs. 36%), while the youngest bracket was likewise much more likely to point to Instagram than the oldest set (24% vs. 13%).

[SPONSORED – Free Ebook – The Content Marketing Survival Guide: How to Navigate the Wilds of Social Media

So while Facebook is the most-used platform across each of the Millennial age groups, its appeal appears to be lower among the younger brackets. This fits with recent research from the Temkin Group, in which 18-24-year-olds demonstrated the biggest drop in Facebook use of all adult age groups, on both desktops and mobile phones. (We pause to remember the media frenzy of 2013, when there was a big fracas about Facebook and teens. Seems to have really hurt Facebook’s bottom line… /sarcasm.)

Nevertheless, there’s reason to believe that other platforms simply have more appeal with youth. The 18-24 set, for example, are about as likely to say they use Snapchat (30%), Instagram (34%) and YouTube (36%) each day as they are to say the same about Facebook (38%). By contrast, the 30-34 group is more than twice as likely to use Facebook each day as Snapchat (48% and 20%, respectively).

One more result: Facebook was the only social platform of the 7 identified in which Millennials were less likely than non-Millennials (35+) to report everyday usage.

Lessons? Not all Millennials are created equal. And for parents, if you want to get your kids off a social platform, start by creating an account on it…