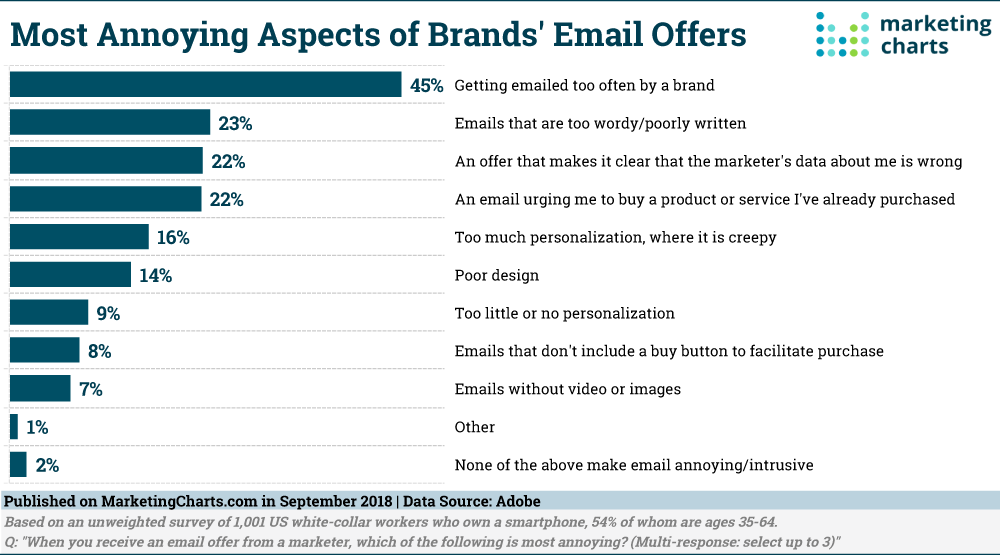 Email continues to be consumers’ preferred form of brand communication. But that doesn’t mean it’s not without its faults! In a recent study, Adobe breaks down some of the most frustrating aspects of email communications, based on a survey of 1,001 white-collar workers in the US who own a smartphone.

Consumers have a message for email marketers: don’t overshare! By far the most annoying part of receiving email offers from marketers is getting emailed too often, according to the survey. Almost half (45%) of respondents complained that over-frequency is one of their top 3 annoyances (from the list provided), with this an especially sore point with respondents ages 35 and older.

Only half as many respondents pointed to the next-most annoying aspects of brand emails. Those closely-grouped frustrations are:

Previous research has likewise indicated that subscribers are most apt to unsubscribe from promotional emails due to receiving too many or irrelevant emails.

Clearly those same frustrations can apply to email…

There are some interesting age-related divergences in these responses. Compared to their older counterparts, the youngest bracket (18-24) seems fairly unfazed by emails that are too wordy or poorly written, rating this a lesser annoyance than many others listed.

By contrast, the youngest group is a bit more turned off by emails that are irrelevant, whether that be due to a clear lack of data on the recipient or by urging a purchase that has already been made.

Too Much Personalization Is Worse Than Too Little

Brands may have to tread carefully: as the above finds, relevance is important to consumers. But marketers need to make sure they don’t overstep boundaries.

What’s more, this was true across age groups – with too much personalization being particularly frustrating to the 25-34 group.

Just to complicate things even further, that same age group (25-34) was the most likely to say that it’s important that brands customize their communications with them as individuals. A majority (56%) classified such customization’s importance as a top-2 box on a 5-point scale, compared to 37% of 18-24-year-olds and 42% of respondents ages 35 and up. So customized communications are important, but not overly personalized ones…

Here’s where lack of relevance rears its head again: the most frustrating way that brands lack personalization in emails is by recommending items that don’t match the recipient’s interests, according to a separate question in the report.

This is the most annoying aspect for each age group, ahead of the inclusion of offers that have already expired.

Meanwhile, one of the top ways by which brands can improve their emails is by better personalizing content to the recipient’s interests. Brands are also implored to make emails less about promotion and more about providing information, as was the case in last year’s report.

What About Reading Emails on Smartphones?

Smartphones are easily considered the primary device for checking personal emails, across age groups. So it certainly pays to optimize emails for mobile devices, which is a common practice these days.

The most annoying aspects of reading email from a brand on a smartphone are:

Consider the target audience when judging these frustrations: too much text emerges as the leading frustrating for youth ages 18-24.