For Bing and Yahoo, Desktops Produce the Most Paid Search Clicks 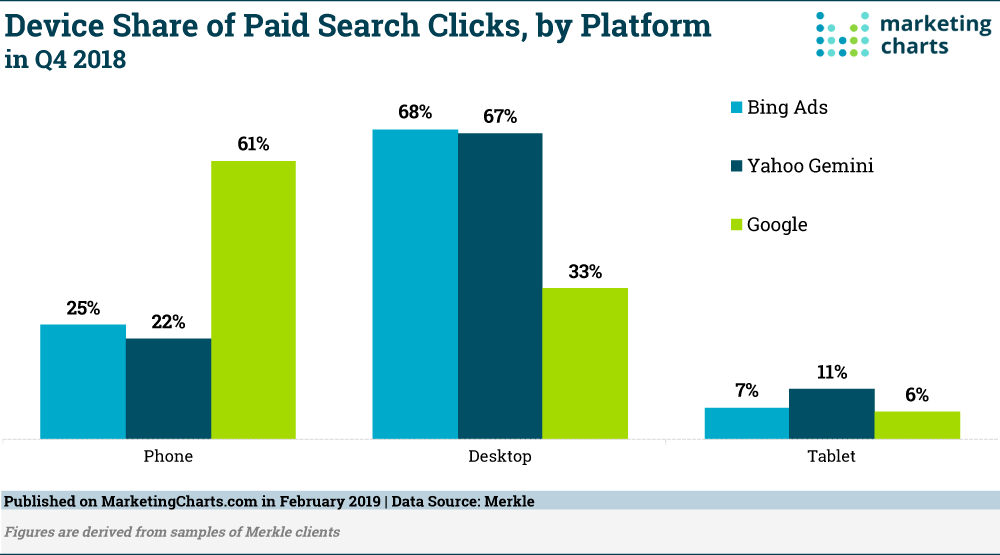 Total paid search spend grew by 16% year-on-year during the 4th quarter of 2018, according to the latest quarterly report [download page] from Merkle, covering client activity. Even more impressively, the analysis revealed a 42% year-on-year growth in spending on smartphone Google search ads.

Compared to figures from Q4 2017, where smartphones represented half (50%) of paid search clicks, the same quarter in 2018 saw smartphones’ share of paid search clicks rise to 58%. Mobile devices (both phone and tablets combined) also accounted for more than two-thirds (67%) of Google search ad clicks in Q4, with the majority (61%) of that figure being on smartphones.

The breakdown of paid search clicks by device reveals a sharp contrast between Google and its competitors. Whereas two-thirds of search ad clicks on Google occurred on a mobile device during Q4, mobile devices contributed only half as many (roughly one-third) of clicks on Bing Ads and Yahoo Gemini.

When it comes to acquiring mobile visitors, previous research by Adobe found that nearly two-thirds (62%) of marketers identified paid search on mobile as being either extremely or very effective. Google’s contribution to this success is undeniable. In Q4 2018, Google produced some 96% of phone clicks and generated 98% of US paid search spend on smartphones.

Taking a look at paid search on desktop, it’s clear that default browsers can have an effect on paid search clicks. Bing, which is owned by Microsoft, produced 45% of its clicks on Edge/IE, compared to that of Google’s 3% and Yahoo Gemini’s 11% on the same browser.

The same is not necessarily true when it comes to Chrome Desktop, where the gap between search engines wasn’t quite as wide. Chrome, which is owned by Google, only accounted for about one-fifth (22%) of Google’s clicks. Yahoo Gemini generated the most clicks on Chrome, with more than one-third of the search engine’s total clicks.

About the Data: Figures are derived from samples of Merkle clients who have worked with Merkle for each marketing channel. Where applicable, these samples are restricted to those clients who 1) have maintained active programs with Merkle for at least 19 months, 2) have not significantly changed their strategic objectives or product offerings, and 3) meet a minimum ad-spend threshold. All trended figures presented in this report represent same-site changes over the given time period.