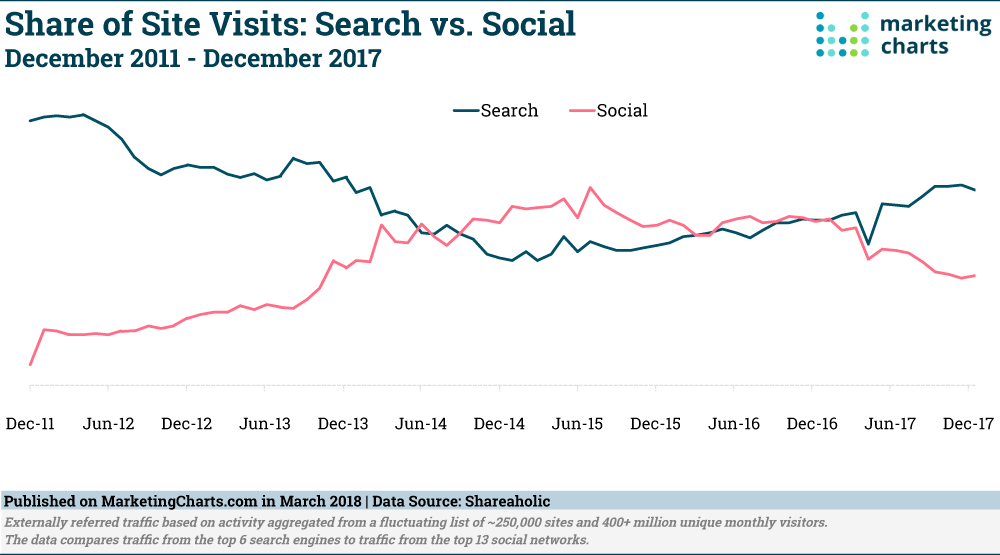 Two separate reports together paint a clear picture of a strong shift for web publishers: last year search wrestled back the mantle from social as the top referrer of traffic. That’s according to recently-released data from Shareaholic and from Parse.ly.

Shareaholic’s report is based on externally referred traffic from 400+ million users to more than 250,000 mobile and desktop sites that use its content marketing and publishing tools. These sites encompass a variety of categories – such as food, tech, and marketing – and range from independent blogs to publishing companies and commerce sites of various sizes.

The data shows a marked shift in 2017. Whereas social had overtaken search as a referrer of traffic in late 2013 and largely remained that way in the ensuing years, search regained the lead in early 2017.

The top search engine in terms of share of visits is of course Google, which ended up accounting for more than 97% of search-referred visits during the second half of 2017, per Shareaholic’s data.

By contrast, the leading social platform – Facebook – saw a rather large decrease in its contributed share of visits. By the second half of 2017, it accounted for just 18.2%, down from 30.9% a year earlier.

Facebook’s large decline – it appears to have peaked as a referrer in 2015 per Shareaholic’s data – is unlikely to abate, as it recently changed its algorithm again to favor posts from family and friends over those from publishers and brands.

Meanwhile, data from Parse.ly comes to a largely similar conclusion, using a different sample of sites.

Parse.ly dug into its customer base, which numbers more than 1,000 media websites, including some of the world’s largest news sites, such as the Wall Street Journal.

Unlike Shareaholic’s data, which is based on an ever-changing number of sites, Parse.ly used a fixed set of customer sites to eliminate the effect of a changing database throughout 2017.

What it found in a review of approximately 600 publishers was that these customers saw a 25% decline in Facebook referral volume between February and October 2017, concurrent with a 17% increase in traffic from Google. As a result, whereas Facebook had been ahead of Google in terms of referral traffic in early 2017, Google took the lead as of about August, and hasn’t looked back since.

Indeed, Parse.ly’s live referral dashboard indicates that as of time of writing, Google Search accounts for twice as many referrals (44% of all external referral volume) as Facebook (22%). (Unlike with Shareaholic’s data, Pinterest is a bit player – at 0.64% – which is likely due to Parse.ly’s data being limited to news sites.)