Videos Get More Interactions Than Images, And Other Instagram Benchmarks

This article is included in these additional categories: Digital | Featured | Social Media | Video 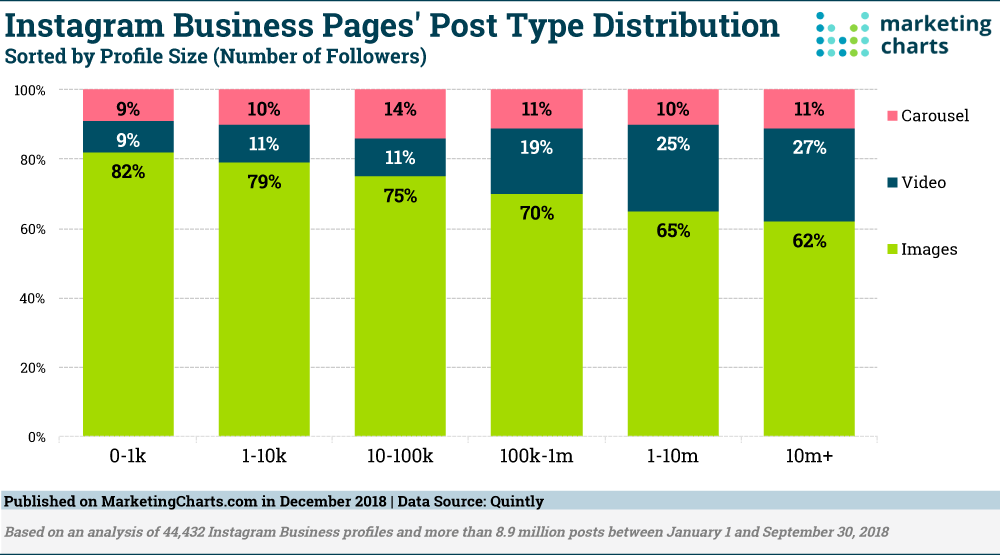 The more followers an Instagram business page has, the more likely it is to include video in its mix of post types, according to a study from Quintly. As part of its report, Quintly analyzed more than 8.9 million posts during the Q1-Q3 2018 period from more than 44,400 profiles ranging in size from 0-1k followers to more than 10 million followers.

However, the finding that 1 in 6 posts are Videos masks some intriguing differences by profile size. When sorting the results on post type distribution by page size, the analysis found a near-linear correlation between size and likelihood of using Videos. In other words, the larger the follower number, the more likely the page to use videos as part of the post mix, and the less likely to use Images.

This could simply reflect the greater resources that larger profiles have at their disposal to create and distribute branded videos.

That’s an impressive result, considering that Videos were only a fraction of all posts. In other words, despite only accounting for fewer than one-third as many posts as Images, Videos generated 21% more interactions overall.

It makes some sense that Video would generate strong engagement rates, as Instagram is primarily a youth-focused platform and research suggests that youth enjoy branded video content. Marketers are also demonstrating strong optimism surrounding the future of use of video in social media: research earlier this year found 77% of social media marketers planning to increase their use of video in the year ahead.

If the focus is going to be on visuals – be they images or videos – there may not need to be too much text associated with them. According to the analysis, the highest interactions experienced by the 4 profile groups ranging in follower size from 0-1k to 100k-1m were for posts with 1-50 characters. And for the largest pages (1-10m, 10m+ followers), posts with zero characters performed best in terms of interactions.

Such text-light posts are scarce, though. Among the almost 9 million posts analyzed, fewer than 1 in 10 had 50 or fewer characters, with 8.2% having 1-50 characters in the description and 1.1% having no characters at all.

Fewer Hashtags Than Emojis; Try Out the Weekend

The report turned up some other notable findings. Business pages tend to not overdo it with the hashtags, with almost two-thirds of posts opting for 0-3 hashtags. That seems like the right strategy, as 4 of the 6 groups analyzed got their best results from ignoring hashtags altogether, while the smallest profiles had the most interactions when including 1-3 hashtags.

As a counterpoint, though, it should be noted that the largest profile pages by follower size did best when using more than 10 hashtags…

Meanwhile, posts tended to generate more interactions when they included at least 1 emoji. The data was mixed here, with some profile sizes doing best when including 1-3 emojis, and others better with 4-10 and even more than 10 emojis. Considering that the majority (54.9%) of posts didn’t include any emojis, this seems like something worth exploring.

Finally, it also could be useful to experiment with more weekend posts. Average interactions per post were 22.3% higher for those made on Saturdays and Sundays than they were for those on a weekday.