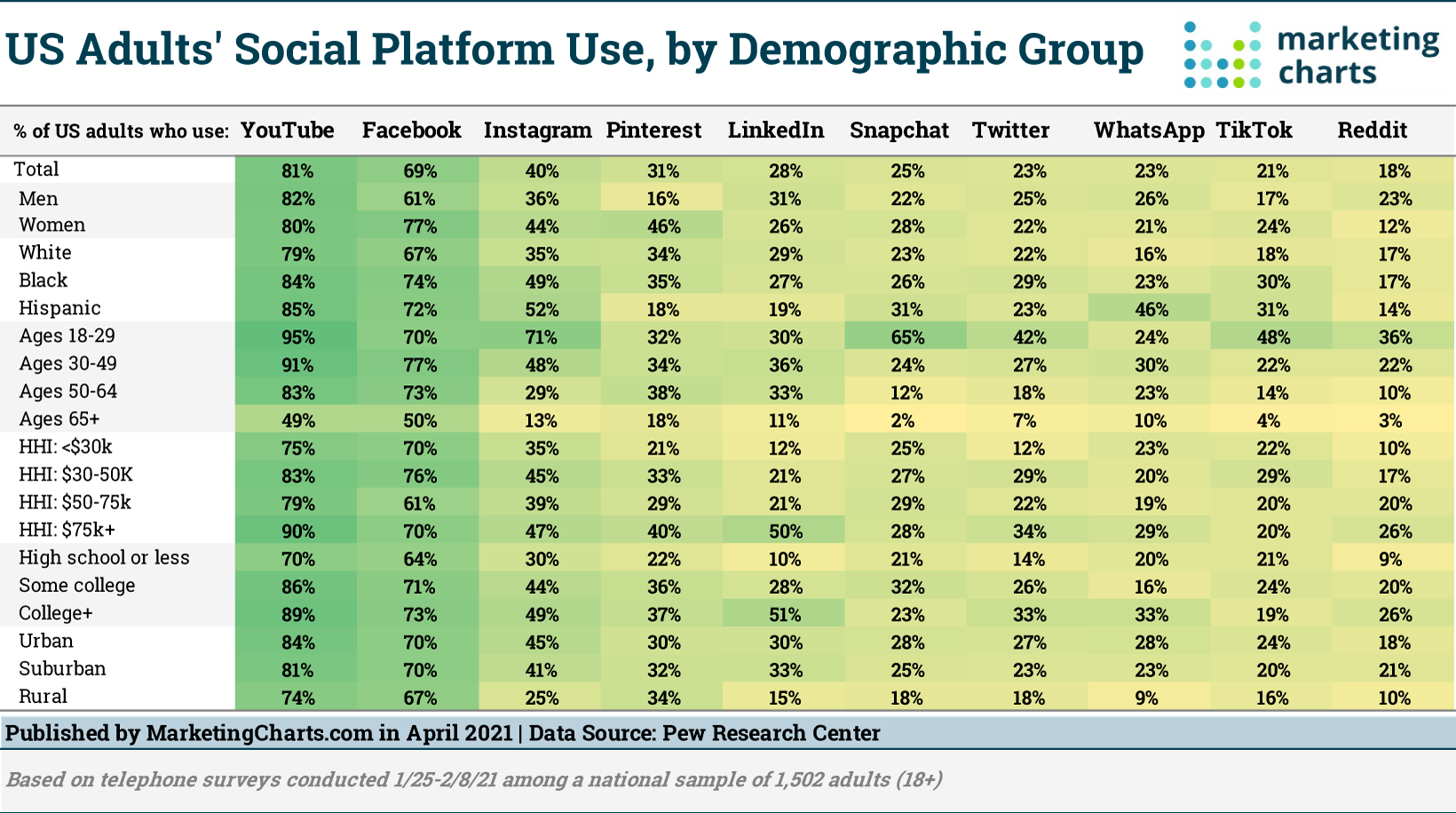 YouTube remains the social media platform used by the most US adults. Some 8 in 10 adults view videos on YouTube, with usage high across demographic groups, according to a study from the Pew Research Center.

The following is an overview of some of the highlights from the report. (Click on the above chart to enlarge it and see full details.) For trend purposes, some of the following data is compared to a similar report issued by Pew Research in early 2019.

YouTube adoption, which now stands at 81% among US adults, is up from findings in 2019 when it stood at 73%. YouTube remains popular with both men (82%) and women (80%), with usage among women increasing markedly from 68% two years ago. Adoption is higher among multicultural groups, with Hispanic (85%) and Black (84%) adults ahead of White (79%) adults.

YouTube adoption is highest among those in the top income bracket defined in the report. Some 9 in 10 adults with an income of $75K and above use the platform. It also appears that the higher the level of educational attainment, the more likely the individual will use YouTube. Also, more adults living in urban (84%) and suburban (81%) areas watch YouTube than those that live in rural areas (74%).

Despite the problems Facebook has encountered over the past few years, including an advertiser boycott last summer, adoption of the platform has remained steady at 69%. Facebook adoption is higher among women (77%) than men (61%), as well as slightly higher among Black (74%) and Hispanic (72%) adults than White adults (67%).

When sorting by age group, adoption of Facebook is highest among adults ages 30-49 (77%). However, usage among older adults has increased since 2019. Close to three-quarters (73%) of adults ages 50-64 now use Facebook (up from 68%), while half of individuals ages 65 and older do so. Only 7 in 10 adults in the youngest age bracket (ages 18-29) say they use Facebook. Considering recent findings from Piper Sandler that shows Facebook has the least engagement among teens and is towards the bottom of the list for their favorite social platforms, this share is likely to drop further in the coming years.

Looking at adoption across income levels, adults with a household income between $30K and $50K have the highest usage (76%), with the lowest being among those with an income of $50K-$75K (61%). Again, education attainment appears to be a factor in usage, with 73% of those with at least a college education using the platform compared to 64% who have a high school education or less.

Instagram adoption has grown — currently at 40%. That said, it appears a prediction from eMarketer that adoption growth for the platform will slow has come to fruition, as 2019 data showed Instagram’s reach at 37%.

About 3 in 10 (31% of) US adults use Pinterest. The platform does have a few characteristics that make it unique in terms of demographic variances.

The first is that it has the biggest gap in use by gender. Nearly three times as many women (46%) as men (16%) use Pinterest.

It is also the only platform that exhibits little difference in adoption among urban (30%), suburban (32%) and rural (34%) adults.

Some 28% of adults in the US use LinkedIn, with more men (31%) than women (26%) using the platform. Although Black (27%) and White (29%) adults use LinkedIn at an almost similar rate, the platform remains less popular among Hispanics (19%).

Perhaps unsurprisingly, LinkedIn is far more likely to be used by adults with at least a college degree (51%) than those with high school or less (10%).

One-quarter of US adults use Snapchat, about the same percentage that used the platform in 2019 (24%). Although adoption was equal among men and women in 2019 (24%), a gap has emerged, with 28% of women now using the platform compared to 22% of men.

Unlike other platforms already discussed, there is very little difference in usage along income level lines. There also doesn’t appear to be a correlation between education level and usage.

Twitter, again, shows a fairly clear pattern of age-related use, highest among 18-29-year-olds (42%) and dropping with each successive age bracket to 2% of the 65 and older group.

As with several other platforms, Twitter use is broader among adults with higher household incomes and educational attainment and is more widespread among urban than rural adults.

Tied with Twitter, 23% of adults in the US use WhatsApp.

What stands out the most with WhatsApp is its use among Hispanics. Close to half (46%) of Hispanic adults use the communication app, which is twice that of Black (23%) adults and almost three times that of White (16%) adults.

As with most other platforms, WhatsApp use is highest among the most well-off and well-educated.

Finally, just 9% of rural adults use WhatsApp, less than half the national average.

As the first of the two new platforms to this year’s survey, TikTok is used by one-fifth (21%) of adults.

The short-video app has been a favorite among teens but has seen significant growth in usage among adults in the past year. Much as with Snapchat, use among the youngest adults (ages 18-29, 48%) is considerably higher than any other age brackets. Indeed, more than twice as many younger adults use TikTok than the next age group (ages 30-49, 22%).

There is also a reversal in usage trends when it comes to the level of education. While most platforms already discussed show higher usage among those who have achieved a higher level of education, the opposite is true for TikTok users.

Reddit is used by the 18-29 age group (36%) most, with usage decreasing with age. Adoption is also broader among adults with higher household incomes and educational attainment, but it is one of two platforms used by more suburban adults than urban or rural.

The final platform on the list is also new to the survey this year. Nextdoor, a platform focused on connecting people within their neighborhood and community, is currently used by about 1 in 8 (13% of) US adults.

It also follows the trend of some other platforms with usage increasing as household income increases, as well as with the level of educational attainment. The platform is also used most by urban (17%) and suburban (14%) adults, while only 2% of rural adults report using it.

Snapchat and Instagram are even when it comes to engagement, with both sites seeing 59% of users reporting visiting the platforms daily. That said, some 45% of Snapchat users say they access the site several times a day, compared to 38% of Instagram users who do the same on that site.

Although YouTube has high adoption, only a little more than half (54%) of its users visit the site daily. Meanwhile, 46% of Twitter users visit the platform on a daily basis, with 30% doing so several times per day.

About the Data: Pew notes as part of the description of its methodology that: “The analysis in this report is based on telephone interviews conducted Jan. 25 – Feb. 8, 2021, among a national sample of 1,502 adults, 18 years of age or older, living in all 50 U.S. states and the District of Columbia (300 respondents were interviewed on a landline telephone, and 1,202 were interviewed on a cellphone, including 845 who had no landline telephone). The survey was conducted by interviewers under the direction of Abt Associates.”