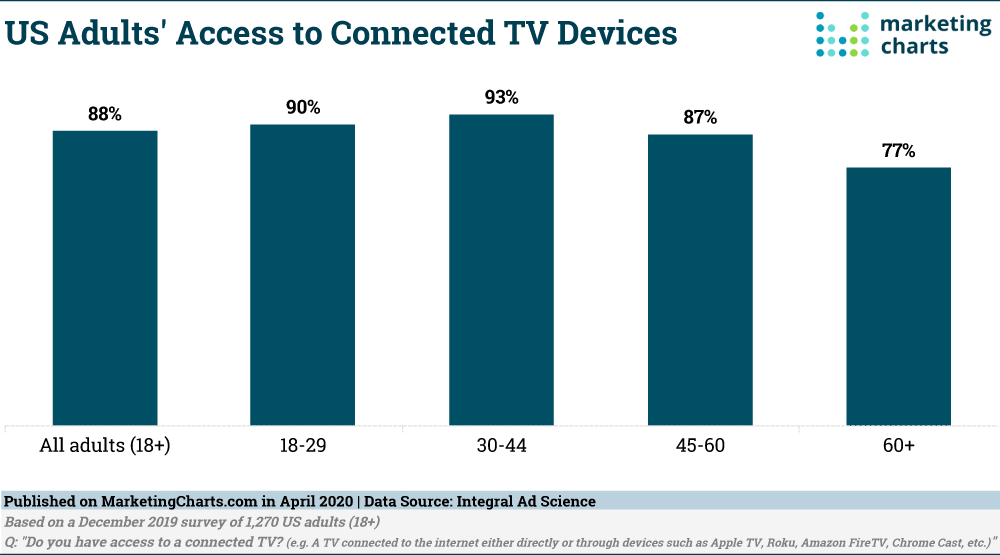 A strong majority of US consumers have access to a connected TV (CTV) device. And, as the device that’s become the most popular for consumers streaming OTT content, CTV has become ubiquitous to those who choose to bypass traditional television platforms like cable or broadcast, according to a new report [download page] by Integral Ad Science (IAS).

CTV shows up as the most popular device for streaming OTT content, with 8 in 10 (80%) respondents using it alongside alternatives like mobile (61%), desktop or laptop (39%) and tablet (38%). There is also a clear preference for connected TV above its competitors: nearly 6 in 10 (59%) US adults surveyed report that CTV is their primary method of streaming video.

This preference for CTV fits with the thriving popularity of subscription streaming services. More than 8 in 10 (83%) respondents subscribe to at least one paid streaming video service with, unsurprisingly, Netflix being the service most respondents currently use (79%) and prefer (46%). Some 68% of respondents report currently streaming via Amazon Prime Video, but significantly fewer (17%) prefer this over other services.

What’s more, CTV’s popularity has previously been highlighted as an important asset for advertisers. The device accounted for the largest share of video ad impressions in 2019 as well as the highest video ad completion rate compared to other devices.