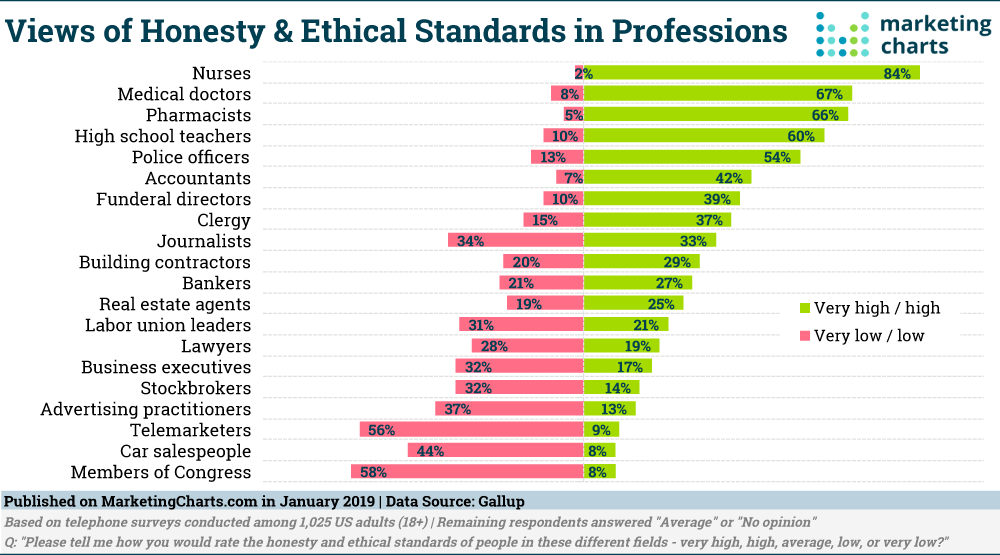 Advertising professionals remain among the least trusted professionals in America today. This finding comes from Gallup’s most recent report on honesty and ethics in professions, which puts advertising  practitioners 4th from bottom in the rankings. This is just slightly ahead of telemarketers, car salespeople and the oft-despised members of Congress.

Just 13% of the US adults polled said they would rate the honesty and ethical standards of advertising professionals as “high” or “very high”. In a similar result to last year, almost three times as many (37%) say they have a “low” or “very low” opinion of this group’s standards.

To understand the significance of this, bankers are almost twice as high to be held in positive esteem (27%), a profession that fewer than 1 in 5 trusted (19%) at the height of the financial crisis in 2009.

That being said, the advertising profession has seen a small increase in the numbers trusting them over the past few years. Last year, the figure was 12%, while it was 11% in 2016 and 10% in 2015 and 2014 respectively.

The five most trusted professions for honesty and ethics in 2018 (among those surveyed) were:

In a newsworthy year, journalists have seen a significant increase in American’s ratings of their honesty and ethical standards. While still not outstanding (33% giving a “high” or “very high” rating), this represents a 10 percentage point increase from two years ago and a level not seen since 1977. However, there is a significant divide in views between Republicans and Democrats, with just 10% of the former having high levels of the trade’s ethics compared to 54% for the latter.

Separately, just 17% rate the honesty and ethical standards of business executives highly, relatively unchanged from last year’s figure (16%). However, this figure doesn’t necessarily represent the opinion of business overall, as last year’s Edelman Trust Barometer demonstrated that 48% of the US public trusts business as an institution, compared to just 42% for the media – trust of which also falls along party lines.

A summary of the findings from Gallup can be viewed here.

About the Data: The responses are based on 1,025 telephone interviews of US adults (18+) conducted in December 2018.