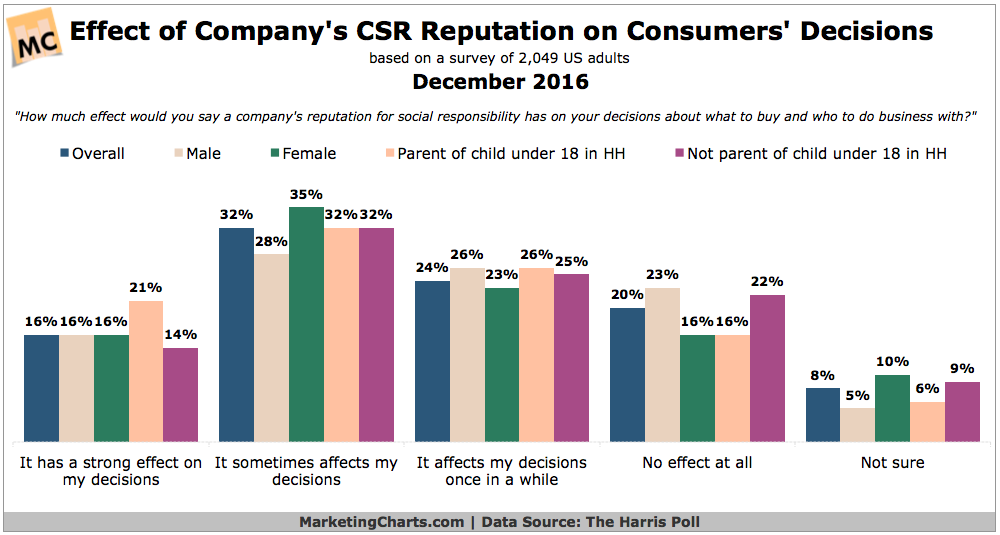 For 16% of American adults, a company’s reputation for social responsibility has a strong effect on the decisions about what to buy and who to do business with, per results from a Harris Poll survey of more than 2,000 US adults. While that’s outweighed by the 20% for whom corporate social responsibility (CSR) reputation has no effect at all, most Americans say that CSR affects their decisions at least once in a while.

The impact of a company’s CSR on purchase decisions doesn’t appear to vary much by generation, with a low of 15% of 35-44-year-olds reporting no effect to a high of 27% among the 55-64 bracket. However, that latter age group is among the most likely to report a strong effect on their decisions, such that the differences overall aren’t too dramatic. Separate research into CSR has found that it tends to be taken into consideration more by Millennials than by older age groups, though.

Looking further across demographic groups, the results indicate that:

The survey, fielded primarily to gauge attitudes towards Giving Tuesday (November 29), also found that only 1 in 4 adults have heard of Giving Tuesday, including just 4% who have participated. Some 48% claim to be likely to make a contribution on Giving Tuesday, though.

Who might they donate to? Human services, such as blood banks, food banks and homeless shelters, could be first in line as the charities that consumers prioritize. One in 5 respondents said that human services charities are the ones they care most about personally and/or donate their time and/or money to the most. Following human services are charities focused on animals (12%), religious organizations (11%) and youth/family charities (8%).

About the Data: The Harris Poll was conducted online, in English, within the United States between November 18 and 22, 2016 among 2,049 adults (aged 18 and over). Figures for age, sex, race/ethnicity, education, region and household income were weighted where necessary to bring them into line with their actual proportions in the population. Propensity score weighting was also used to adjust for respondents’ propensity to be online.