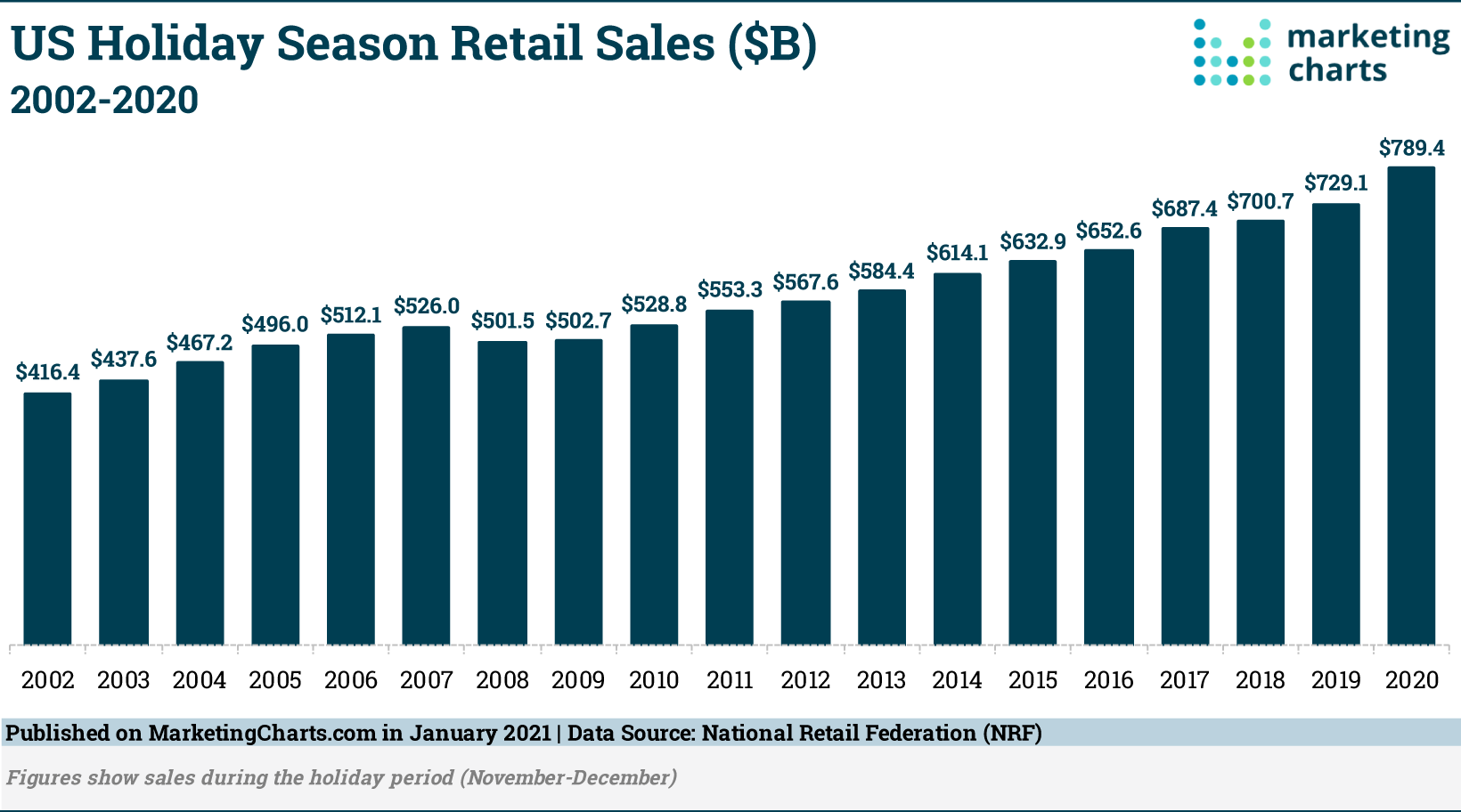 Despite much lower predictions, data from the National Retail Federation (NRF) finds that retail sales, including online and other non-store sales, for the November through December 2020 holiday season grew by an impressive 8.3% over the same period in 2019, reaching $789.4 billion.

The NRF had predicted that holiday retail sales would only grow somewhere between 3.6-5.2%. Instead, the actual growth of 8.3% is more than double the average holiday sales increase (3.5%) seen over the past 5 years.

Online and other non-store sales accounted for $209 billion of total sales, a year-over-year increase of 23.9%, which is about on par with NRF’s forecast in late November.

Sales at building materials and garden supply stores saw the largest increase, growing 19% over 2019, while sporting goods store sales were up 15.2% year-over-year. However, electronic and appliance stores (-14.9%) and clothing and clothing accessory stores (-14.9%) reported double-digit decreases.

Mastercard’s SpendingPulse data reveals considerably less growth in holiday sales than the NRF. Its data shows that in the period between November 1-December 24, total retail spending (excluding automotive and gas) increased by just 2.4% in 2020.

And, while online shopping had seen some increases over the past several years, e-commerce sales experienced an incredible gain of 47.2% during the traditional holiday season, per Mastercard’s report. SpendingPulse data also reveals that online shopping accounted for close to one-fifth (19.7%) of total retail sales during the period.

As far as shopping categories are concerned, the Electronics & Appliance category, which typically experiences higher-than-average sales growth during the holidays, saw a rise of 6% over 2019. However, the Furniture & Furnishings (+16.2%) and Home Improvements (+14.1%) categories grew the most year-over-year during the period – possibly due to people spending more time at home – while categories such as Luxury (-21.1%) and Apparel (-19.1%) saw steep declines in retail sales.

Figures from Adobe Analytics,  which analyzed 1 trillion visits to US retail sites, finds that US online sales reached $188.2 billion during November and December, representing a year-over-year increase of 32.2%. The $188.2 billion total also exceeded the predicted online shopping total of $184 billion, with 25 of the 61 days featuring at least $3 billion in revenues.

Sales via smartphones accounted for almost two-fifths (39%) of e-commerce sales. Although conversion rates on smartphones trailed those of laptops and other devices, they reached a significant 3.31% on Cyber Monday.

Amazon reports yet another record-breaking holiday season. The e-commerce giant says it delivered more than 1.5 billion products worldwide during the holiday season, including toys, home products and electronics.

Amazon also reports that more than 8 million items were shipped to alternative delivery locations which include Amazon Hub lockers and their physical retail stores, Amazon 4-star and Amazon books. In a year where e-commerce has seen strong growth, Cyber Monday sales increased by 15.1% over last year to reach $10.8 billion. That’s according to data from Adobe, which found that between Thanksgiving Day and Cyber Monday (but excluding Sunday), shoppers spent $29.7 billion from online retailers.

Adobe Analytics examined 80% of the online transactions at the largest 100 US online retailers and found that the largest share of online spending for the period took place on Cyber Monday. And, while Black Friday is traditionally set aside for in-store shopping, it appears that the pandemic caused shoppers to do more of their shopping online, with spending reaching $9 billion, a year-over-year (y-o-y) increase of 21.6%.

However, the biggest growth in online sales happened on the Saturday after Thanksgiving — Small Business Saturday. Shoppers spent 30.2% more online on that day than they did in 2019, for a total of $4.7 billion.

In between eating turkey and (potentially) spending time with family, consumers also found time to shop online on Thanksgiving Day, spending $5.1 billion, an increase of 21.5% y-o-y.

Here’s a look at the latest data from other sources concerning the period between Thanksgiving and Cyber Monday:

More Highlights From Other Research

Here’s an update on more general data gathered since our last update. Links to the research are provided at the end of each bullet point. After holding off on their projections for US holiday season retail sales, the National Retail Federation (NRF) has just released their forecast. This year, NRF projects that holiday sales in November and December will grow by 3.6-5.2% over last year to reach between $755.3 billion and $766.7 billion.

Despite all the disruption wrought by the coronavirus pandemic, this projected growth is actually slightly above the 5-year average of 3.5% and nearly on par with the 4% growth recorded during last year’s holiday season. It also comes on the back of what NRF identifies as a V-shaped recovery, with steady growth since June after the COVID-19 pandemic caused stores to shut down and stay-at-home orders were put in place. Indeed, in October, retail sales increased by 10.6% year-over-year. However, with the US gripped by surging caseloads once again and restrictions being once more put in place, NRF’s forecast may prove rosy.

Nonetheless, Q3 e-commerce sales grew by 36.7% over the same quarter last year. NRF expects consumers to continue to do much of their shopping online through the holidays, and estimates that online sales will increase by 20-30%, up to a range of $202.5 billion to $218.4 billion. This is up from the $168.7 billion in holiday season online sales last year. 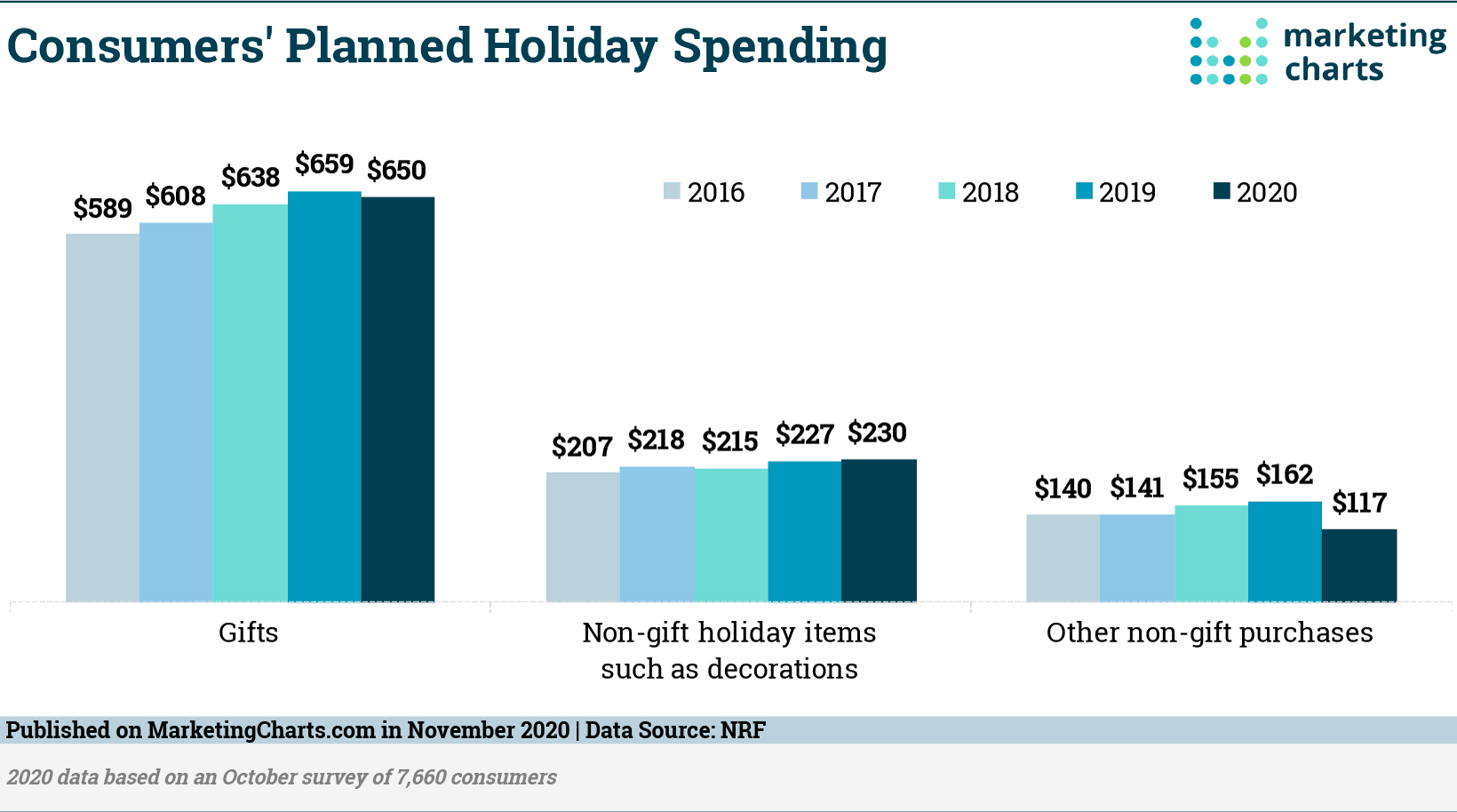 It’s that time again — the holiday season has started. This means that an array of studies are being released, forecasting spending trends, retail destinations and shopping attitudes. This latest annual data hub (which will be updated periodically during the holiday period) highlights key points from holiday-related research for what is likely to be a season like no other, given the ongoing impact of COVID-19.

[Editor’s Note: as with last year’s holiday data hub, this year’s article will highlight one or two unique findings from each piece of research. Readers interested in more data are encouraged to follow the links provided to access the studies.]

Before getting to the list of research highlights, let’s have a look at the broad forecasts for this holiday season.

The following list highlights key points from the studies cited above, along with others. We generally disregard data regarding top gifts and shopping times, as the surveys disagree wildly with respect to these. (You can follow the link to the research to find each one’s results on those.)

Data from Deloitte is one such prediction worth nothing. In a survey of holiday shoppers which found that 51% of shoppers are anxious about shopping in-store during the holiday season due to COVID-19, the results also suggest that nearly two-thirds (64%) of holiday budgets will be spent online this year compared to 28% which will be spent in-store (down from 36% in 2019). PwC reports a similar gap between the share of spending being done online (61%) versus in-store (39%).

Here are some highlights from the myriad surveys and research pieces that have been released in recent weeks. Links to the research are provided at the end of each bullet point.

The State of Traditional TV: Updated With Q3 2020 Data Here Are Forecasts for the Global Ad Market This Year How is the US Ad Market Projected to Fare This Year? What Are Teens Spending on During the Pandemic? Mobile Hovers At Around One-Third of US Retail Digital Commerce 2020’s Top Brands Ranked by Customer Loyalty US Online and Traditional Media Advertising Outlook, 2020-2024 COVID-19 Uncertainty Impacts Back-to-School Shopping Data Hub: Coronavirus and Marketing [Updated]

The State of Traditional TV: Updated With Q3 2020 Data Here Are Forecasts for the Global Ad Market This Year How is the US Ad Market Projected to Fare This Year? What Are Teens Spending on During the Pandemic? Mobile Hovers At Around One-Third of US Retail Digital Commerce 2020’s Top Brands Ranked by Customer Loyalty US Online and Traditional Media Advertising Outlook, 2020-2024 COVID-19 Uncertainty Impacts Back-to-School Shopping Data Hub: Coronavirus and Marketing [Updated]
7ads6x98y