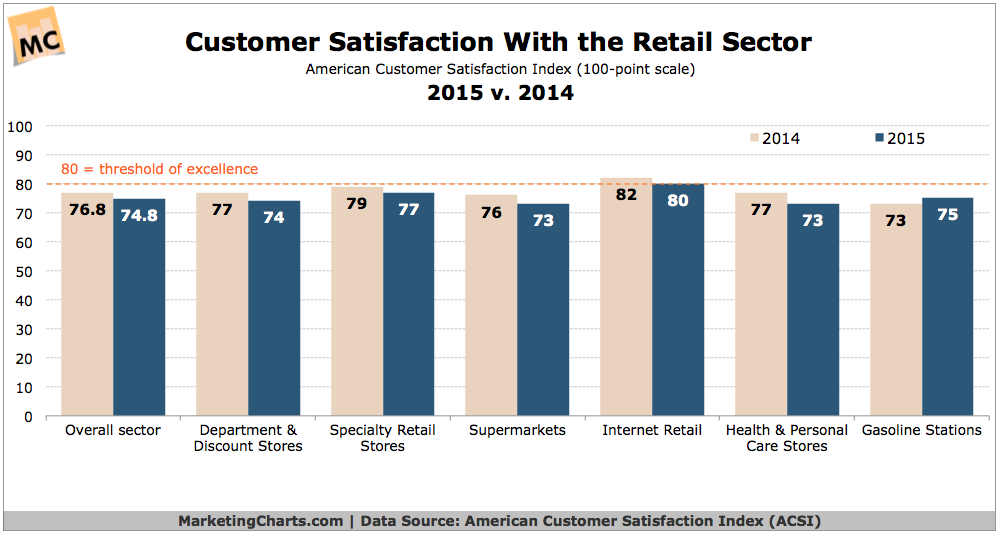 Notes: Customer satisfaction with the retail sector has dipped for the second consecutive year, falling 2 points to a score of 74.8 (on the ACSI’s 100-point scale), the lowest figure since 2007. Online retail continued to be the leading segment, though it too fell a couple of points, to an index score of 80. Gasoline stations, meanwhile, were the only retail segment to see an overall improvement.

The category were leaders were as follows:

Among the biggest drops in customer satisfaction this year (in percentage terms) were Netflix (-6%), Macy’s (-8%) and Whole Foods (-10%).

Related: US Retail Sales Forecast to Grow by 3.1% This Year

About the Data: The ACSI Retail Report 2015 is based on interviews with 9,358 customers, chosen at random and contacted via email between November 12 and December 9, 2015. Customers are asked to evaluate their recent experiences with the largest brick-and-mortar and internet retail sector companies in terms of market share, plus an aggregate category consisting of “all other”””and thus smaller””retailers.