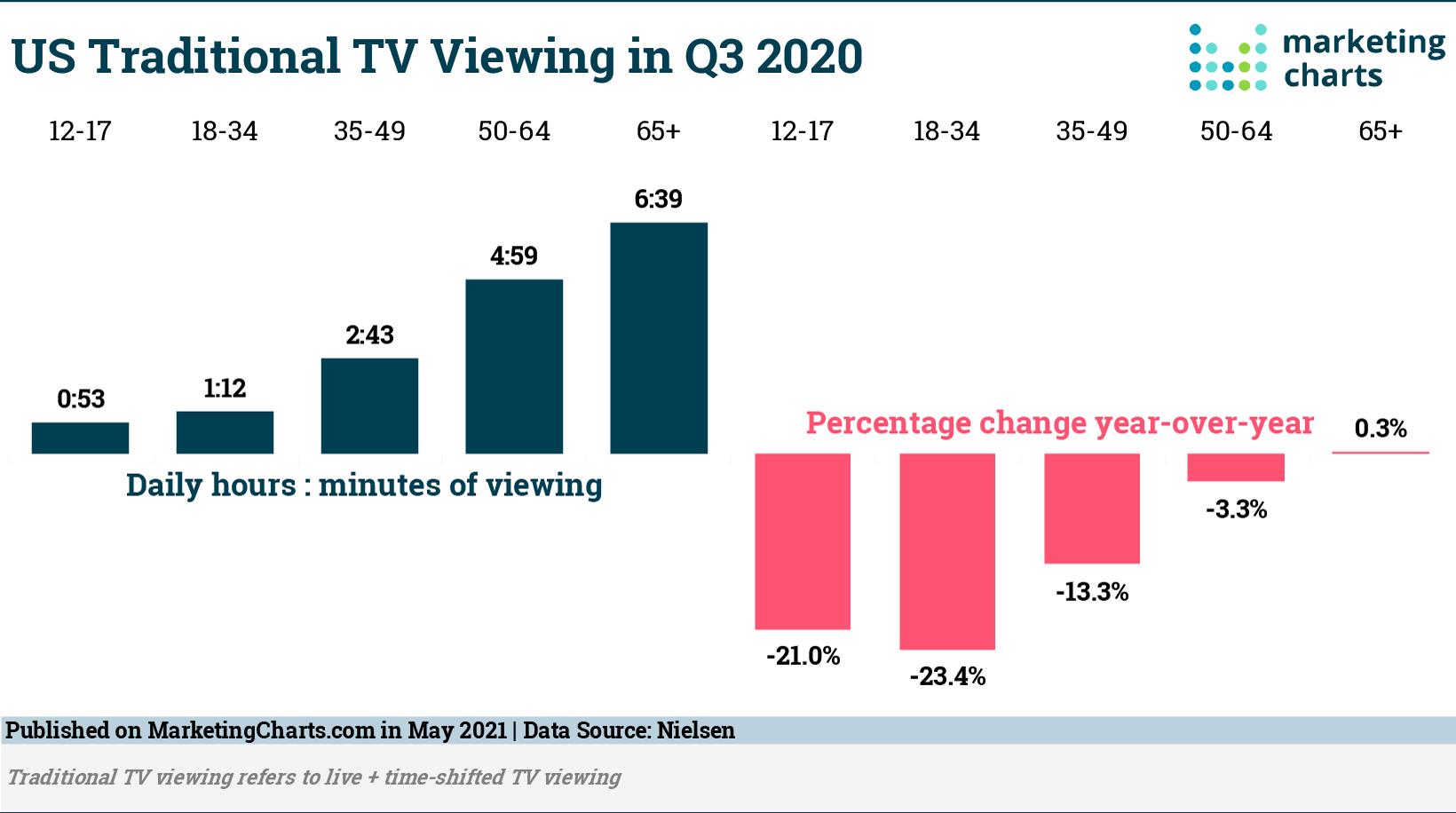 It’s been 6 months and an ongoing pandemic since our last traditional TV update, but it’s time for us to dive into viewing patterns again. Let’s explore some findings from the latest quarterly Total Audience report [download page] from Nielsen, this time covering data from Q3 2020.

Nielsen’s most recent report indicates that Americans aged 18-34 watched a daily average of about 1 hour and 12 minutes of traditional TV during Q3 2020. What does that mean?

No surprises – despite the pandemic and indications that it has resulted in increased TV viewing, youths’ traditional TV viewing is down again. In terms of a year-over-year change, Q1’s figure represents a decline of about 22 minutes per day, according to a review of the figures in Nielsen’s Q3 2020 and Q3 2019 reports.

In percentage terms, the amount of time 18-34-year-olds as a whole spent watching traditional TV (live and time-shifted) in Q3 2020 dropped by 23.4% from the previous year. That’s a huge chunk – a drop of almost 1 in every 4 minutes – and continues years of viewing declines.

To give some context to the extent to which digital has supplanted traditional TV for youth, this latest report indicates that 18-34-year-olds spent about 2.5x times as much time using apps and the web on smartphones alone than watching traditional TV.

A quick note: the above data is averaged among the 18-34 population as a whole, meaning that it includes those (many) youth who don’t watch traditional TV. How many? Traditional TV reached just 62% of 18-34-year-olds during the third quarter (compared to 80% of the adult population). By comparison, 89% of 18-34-year-olds used the internet on smartphones during the quarter.

In Q3 2020 traditional TV users ages 18-34 (those 62%) spent about 1 and 3/4 hours (1:43) per day watching traditional TV. This is a 13-minute decline from the previous year, when they spent almost 2 hours (1:56) per day. The percentage decline (-11.1%) in viewing among traditional TV viewers was not as acute as among the general 18-34-year-old population, indicating that cord-cutting had a role to play in the overall drop in viewing numbers.

The latest study indicates that as a whole, teens watched about 6 hours and 13 minutes of traditional TV per week, or less than an hour per day (0:53).

Q1’s figure represented a 14-minute drop year-over-year, or a considerable decline of 21%.

Although this decline was note quite as large as that witnessed among 18-34-year-olds; the relatively small amount of traditional TV that this group is watching does not bode well for the pay-TV industry…

It’s worth noting that the Q3 2018 Nielsen report (comparisons with earlier editions of the report are not possible due to a methodology change in Q1 2018) had teens watching almost 10 hours per week. In other words, teens’ traditional TV viewing has been cut by 37% in just 3 years.

Compared to the year-earlier period, traditional TV viewing among 35-49-year-olds declined by almost 26 minutes per day, a sizable cut.

In percentage terms, traditional TV viewing among 35-49-year-olds fell by 13.3% year-over-year. That’s certainly not as extensive a decline as seen among the 18-34 demographic, but still a rather large one, representing more than 1 in every 12 minutes previously spent with traditional TV.

It’s also worth noting that during Q3 adults ages 35-49 spent more time every day using apps/web on smartphones than they did watching traditional TV.

Compared to the year-earlier period, traditional TV viewing among 50-64-year-olds declined by about 10 minutes per day. Obviously, the industry is holding onto this demographic more successfully…

During Q3 2020, the 65+ demographic watched an impressive 6 hours and 39 minutes of traditional TV per day.

Compared to the year-earlier period, traditional TV viewing in the 65+ group was actually up, by about 11 minutes per day (0.3%). Once again, the industry is holding onto this demographic a lot more successfully than younger Americans, another measure of how traditional TV’s audience is trending older over time. The pandemic may have played a role here, though, with older adults more likely to stay home and watch TV during these times.

As the data indicates, there are huge differences by age group in terms of viewing behavior, with traditional TV time far greater among older audiences and connected TV time much higher among younger groups, even overtaking traditional TV among teens and 18-34-year-olds. In case you’re wondering how much of that is attributable to reach (with these figures being averaged among the entire population), traditional TV’s reach averaged 81% among Black adults, 76% among Hispanic adults and 65% among Asian-American adults in Q1.

So some part of the discrepancy is due to Asian-Americans being less likely to watch traditional TV, but both Asian-American and Hispanic TV viewers are watching about half as much as African-American viewers.

The grand total? A sizable 5 hours and 21 minutes per day spent consuming video content by the average adult.

That’s plenty of video time, and is about equal to the year-earlier period, with more time this year allocated to TV-connected devices and less to traditional TV.