Pay-TV Customer Satisfaction Back Down to the Industry Cellar 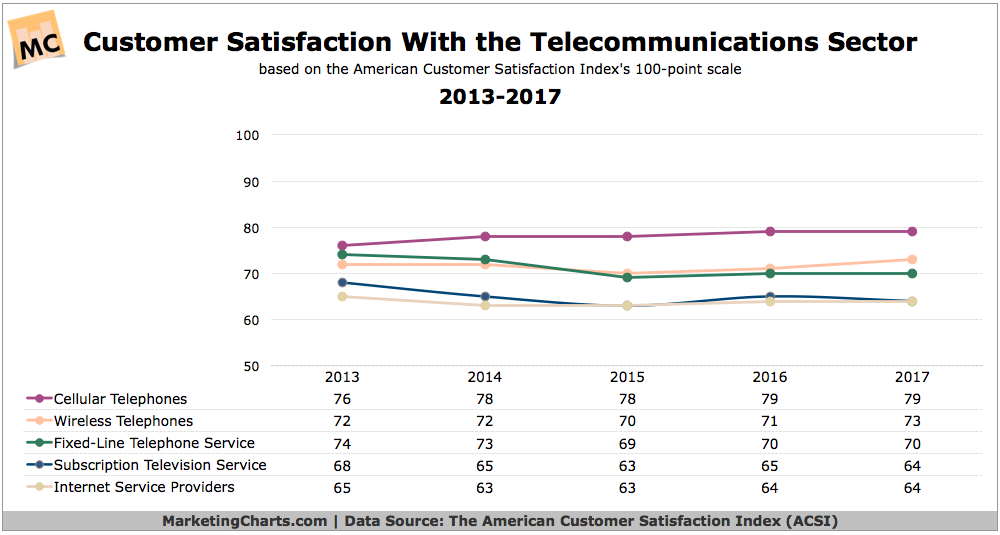 Customer satisfaction with pay-TV companies has dropped this year, finds a new report [download page] from the American Customer Satisfaction Index (ACSI). The index for subscription TV services fell to 64 on the ACSI’s 100-point scale, tied with internet service providers (ISPs), whose aggregate score remained unchanged from last year, for the worst score among all industries measured.

Verizon FIOS remains the highest-rated pay-TV provider this year, with its index score of 71, just slightly ahead of AT&T U-verse (70). Cox Communications and Spectrum (Charter Communications) moved up the chain this year with gains of 3% and 5%, respectively, while Mediacom stayed at the bottom of the rung despite a 4-point gain, with a customer satisfaction index of just 56.

Satisfaction with various elements of the pay-TV experience vary only slightly from last year, led by picture quality. Courtesy and helpfulness of service staff (78) improved by a point while speed of service remained the same. Pay-TV’s weakest area in customer satisfaction continues to be in the call center (65, down from 66).

“The ACSI Telecommunications Report 2017 on cellular telephones, fixed-line telephone service, Internet service providers, subscription television service, and wireless telephone service is based on interviews with 36,194 customers, chosen at random and contacted via email between May 17 2016 and April 25, 2017. Customers are asked to evaluate their recent experiences with the largest telecommunications service providers and phone manufacturers in terms of market share, plus an aggregate category consisting of ‘all other’ and thus smaller companies in those industries.”