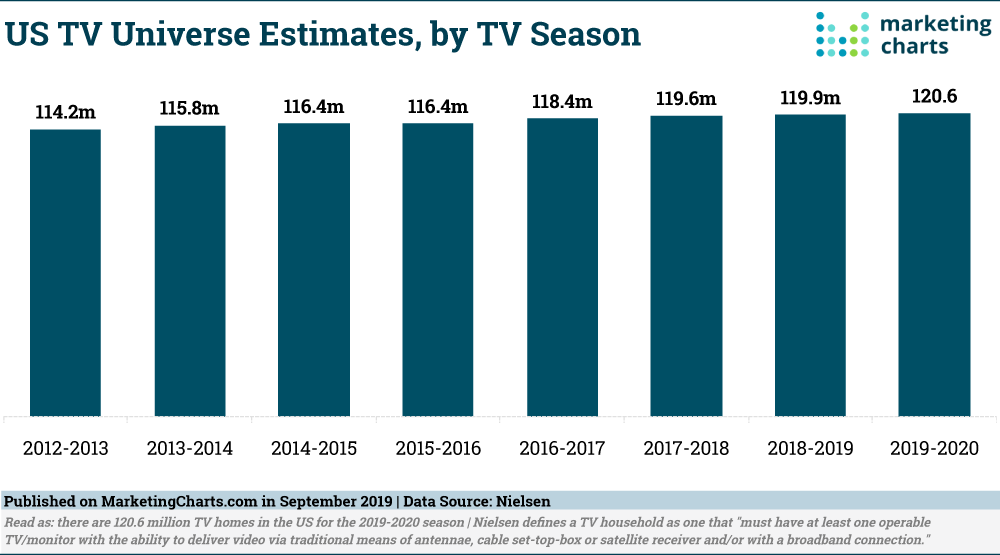 Nielsen reports, once again this year, that there is an increase in the number of US Hispanic, Black and Asian TV households as a result of estimated increases in population growth.

TV viewing patterns across these races and ethnicities are quite different. A previous report from Nielsen revealed that African-American adults are watching about 3 times more traditional TV than Asian-American adults and nearly twice as much as Hispanic adults.

The percentage of US homes with TVs receiving traditional TV signals and/or a broadband connection this year is 96.1%, up slightly from 95.9% last year.

While TV remains the primary medium for entertainment for adults overall, younger adults (ages 18-34 years old) are more apt to find entertainment on their smartphones or computers. In fact, eMarketer forecasts that adults will be spending more time on their mobile devices than on TV starting as of this year.

When adults are viewing TV, they are often viewing it together. Nearly half of US adults spend time co-viewing traditional TV services with a significant other, children, family members or friends.

The rest of the analysis by Nielsen can be viewed online here.

About the Data: Numbers of TV households are those which “must have at least one operable TV/monitor with the ability to deliver video via traditional means of antennae, cable set-top-box or satellite receiver and/or with a broadband connection.”