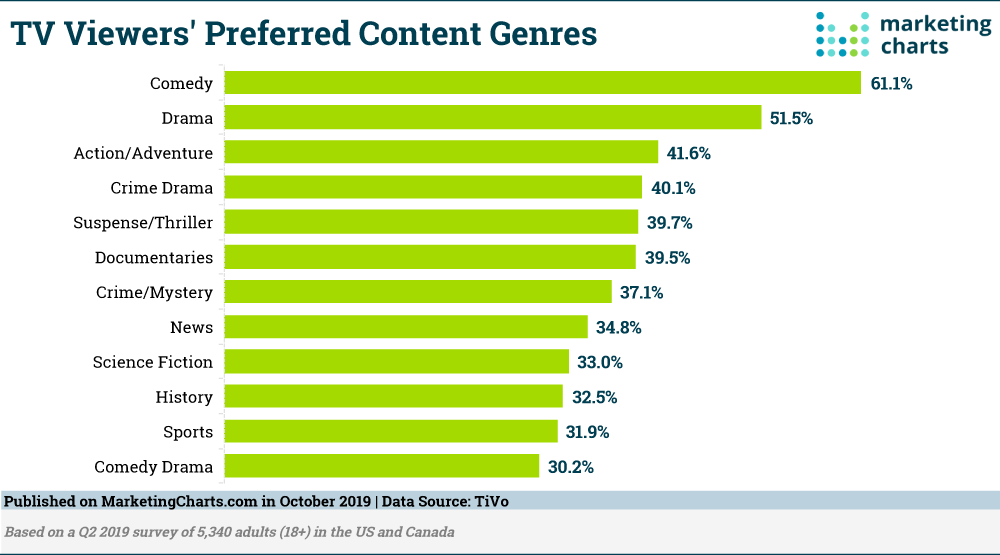 It’s safe to say that TV viewers are not wanting for choice when it comes to options on how or where to view their favorite shows. TiVo’s Q2 2019 Video Trends Report [download page] reveals that, on average, viewers use 7.2 video services such as Netflix, Hulu, pay-TV and YouTube to watch their shows.

But what TV content genres are viewers watching on these services? Among the more than 5,300 North American adults (ages 18 years and older) surveyed, the clear favorite is comedy, as cited by by 61.1% of respondents. Drama (51.5%) is the next-most preferred genre, followed by action/adventure (41.6%), crime drama (40.1%) and suspense/thriller (39.5%).

A report from Nielsen found while certain TV genres such as comedy and reality are still viewed primarily on live TV, other genres including crime drama (broadcast) and drama (cable) are viewed more by digital means.

So, that’s what people are watching, but where are they watching it? According to TiVo’s survey, most viewers (40.4%) are watching new episodes of series they regularly watch on cable or satellite TV. It’s worth noting, though, that other research found that more viewers are watching their favorite shows on Netflix than on live TV.

In fact, Netflix is the place where viewers go to watch movies or TV series they have never seen before, according to the TiVo survey. Nearly two-fifths (38.9%) of respondents turn to Netflix for new content. This also true when it comes to original content. Earlier research shows that Netflix’s original content is one of the reasons a majority of viewers keep their Netflix subscriptions.

About the Data: Findings for the report are based on a survey of 5,340 adults (ages 18 years old and older) from the US and Canada.